Guilty of murder in Careccia deaths

Family and friends of Tina and Michael Careccia packed the pews of Judge Christopher O’Neil’s fourth-floor courtroom for the sentencing of Jose Valenzuela, who had pled guilty to double murder in their 2015 shooting deaths.

Many of them came forward to tell the judge how the murders had traumatized their lives and to ask him for the full penalty available.

In the end, O’Neil did so, calling the crime “an unspeakable evil.” He sentenced Valenzuela to the maximum allowed in the plea deal brokered by his attorneys and the special prosecutor – natural life for the first-degree murder of Tina Careccia and, consecutively, 25 years for the second-degree murder of Michael Careccia.

“That this defendant will not receive the sentence of death is a great and undeserved mercy,” O’Neil said.

Special Prosecutor Gary Husk said the plea agreement sufficiently punished Valenzuela and protected the community, “and I was fortunate to have the support of the family in making that decision.”

“Death penalty cases these days, unfortunately, can result in extensive delays. Even if you do get a conviction and a penalty of a death sentence imposed by the court, it can take decades, literally, before that is imposed,” Husk said. “I think the families in this particular case were committed to trying to bring some resolution to this.

“It has already been over four years to bring this case to this stage. We felt that it was appropriate to resolve it in this fashion and not run the risk of going to trial, and maybe not getting it and if you do get it run the risk of it being overturned 20 years later when you don’t have evidence and you don’t have witnesses any longer.”

Husk was appointed to prosecute the case by Navajo County after Pinal County Attorney Kent Volkmer recused his office from involvement. As a private attorney before being elected in 2016, Volkmer represented the legal rights of Valenzuela’s young son in the early days of the case.

Before the court proceedings Monday afternoon in Pinal County Superior Court, the judge had read every letter, PowerPoint and memorandum given to him from both sides of the case. Several of those speaking to the court said there was no leniency and no forgiveness for Valenzuela’s actions.

Valenzuela, too, read a brief statement, saying he was sorry for all the families, “including my own.”

Despite that, O’Neil said the court “does not find any believable remorse.”

Speaking earnestly and emotionally, O’Neil said while punishment should fit the crime, there is no punishment that could equal the loss of two lives.

“Human life is a sacred and priceless gift. It possesses a value that is beyond measure. It cannot be measured, not in dollars, not in years, not even in the stories and the tears of those left behind. To define and destroy something so precious and so irreplaceable as a human life and all that it entails, all of its value that transcends calculation without just cause, to rob the world of the inestimable value of a mother, father, sibling, child, aunt, uncle, friend is an unspeakable evil.” – Judge Christopher O’Neil

“She was my best friend,” Tina’s daughter Blake Perry told the court. “They never got to meet their first grandchild.”

“My life will truly never be the same,” said Luke Careccia, Michael’s son, who said his father “made me the man I am today.”

The court heard from siblings and other relatives. A social worker read a letter from Michael’s mother. Those who gave victim statements described the brutal ordeal of the past four years, the ongoing panic attacks and even post-traumatic stress symptoms.

Much of the family left the courtroom when defense attorney Bobbi Falduto made a case for mitigating factors. Falduto said Valenzuela asked her not to have his family members speak in court. 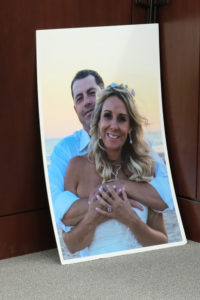 “He really was a good person,” Falduto said. “It wasn’t just their family. Mike, Tina and Jose, they were all good parents. This has impacted his family as well.”

The judge was not moved.

“The aggravating circumstances in this case so desperately outweigh any and all mitigation,” O’Neil said.

The Careccias died the night of Father’s Day 2015 or in the early morning after. Valenzuela had been at a party at the Careccia home that evening before returning to his parents’ home where he lived a couple blocks away on Papago Road. The Careccias later apparently drove to his residence.

Valenzuela claimed they all did drugs together, including methamphetamine. He and Michael Careccia got into an argument, and Valenzuela shot him. He then reportedly held down Tina Careccia and shot her as she pled for her life. Afterward, he borrowed a backhoe and buried the bodies in his backyard just steps from his door.

The Careccias were missing for 11 days as the residents of Hidden Valley and Maricopa searched the area. Pinal County Sheriff’s Office had Valenzuela as a person of interest and used his statements to eventually uncover the bodies early the morning of July 2.

“His actions were calculated, callous, deliberate and depraved; that he committed these murders in the presence of a child, and not only a child but his own son,” Judge O’Neil said. “That he lied, misled law enforcement officers, concealed and destroyed evidence, including the fact that this concealment further desecrated the very bodies of the lives he destroyed of two persons he claims to have called friends.”

Stay with InMaricopa for more coverage.

Man accused of assault, disorderly conduct in incident with girlfriend