Maricopa businesses on State Route 238, miles from John Wayne Parkway, have wonderful views of the Estrella Mountains and lots of room to spread out.

But they don’t have much water.

For two entities with particularly extensive plans, water is fundamental.

Tom Buessing, owner of Highway 238 Industrial Park, has a well that’s sufficient for his current needs. But to meet city requirements for fire protection for the development he has planned on 87 acres, he would need a 180,000-gallon tank.

He would rather have a hookup to Global Water.

Farther west down SR 238 is the real driving force to get commercial water into west Maricopa — APEX Motor Club. APEX is developing its grand plans, having constructed a track for high-end sports cars and a temporary clubhouse, but with much, much bigger plans that have been public for years.

“We currently have no water or sewer, and it’s the remaining piece of the puzzle we need to continue investing in the development, which we are eager to do,” said Matt Williams, vice president and managing partner.

The property came with a well, but it was not feasible to reactivate it.

APEX, too, wants a connection to Global Water and is, in fact, the impetus for the idea of extending a 16-inch water main into west Maricopa. The company is approved for certificates of convenience and necessity (CCN) for water and sewer.

The most difficult delay is caused by right of way. Global Water has a water main extended down SR 238 as far as Loma Road. The next step is to extend down SR 238 to APEX.

That project brings multiple entities into play, not the least being the Bureau of Indian Affairs. A water main would have to cross Ak-Chin land to reach the westside businesses. That requires approval of easements and permits from the Ak-Chin community and lot and lots of paperwork at the federal level.

“They need right of way from the federal government,” said attorney Katosha Nakai of Strickland & Strickland PC, general counsel for Ak-Chin Indian Community. “There is a whole checklist of items. They are in the process of collecting those needs for the feds. From us, they’ve done only one of many steps.”

According to Department of the Interior code, applicants for right of way must have organizational documents, certifications, filing records and resolutions to prove they are in good standing to do business in the jurisdiction.

Then they need “environmental and archaeological reports, surveys and site assessments, as needed to facilitate compliance with applicable federal and tribal environmental and land use requirements and a statement from the appropriate tribal authority that the proposed use is in conformance with applicable tribal law. There is no standard application form,” the code states.

Meanwhile, Global Water and APEX are doing what they can do, besides wait.

“The water line is progressing with the help of our partners at Ak-Chin as well as the City of Maricopa and Global Water,” Williams said. “The first mile is currently in the ground, and we’re working diligently with Ak-Chin’s planning department to secure the necessary permits to continue the line past Ak-Chin Southern Dunes.”

Global Water and APEX are coordinating with several layers of government because they are dealing with federal, state, trust, BIA, tribal and local officials. When the federal checklist is fulfilled, federal officials will talk to the Ak-Chin Community for its input.

“The timeline is unknown at this time,” Corwin said.

According to Global Water, as soon as approvals come, the construction can happen pretty quickly.

Williams said APEX wants to start construction this fall. Buessing would like to break ground in a year.

The federal government will decide whether to issue the right of way on which those plans rely, Nakai said.

Because the thrust of the development is on the shoulders of APEX and Global Water, business owners like Buessing are a bit on the sidelines.

He has other issues.

He has cleared much of his land and put in block walls as partitions in anticipation of a container-based business park. He plans to have the area chip-sealed. He wants to place 66 units to be commercial offices.

While APEX is approved for CCN, Buessing has been more standoffish because it is not clear he’ll have sewer service in the deal. His sweeping plans for a full industrial park would require at least four septic tanks, taking up an acre, a loss equal to $1,500 rent a month.

“The kicker is, Global could bring water out, but they couldn’t provide septic,” he said. “Well, without septic, I don’t want their stinkin’ water. It’s that simple. It would be a big boon to get the septic and the water from Global. To lose an acre doesn’t make me excited.”

Whether he ultimately hooks to the utility as it passes by on its way to APEX or does the project without Global Water could hinge on investors.

“I’m not taking this on,” Buessing said. “I’m just trying to find an investor.”

He first envisioned the container-based spaces about a year ago.

“I’m picturing the people nobody else wants — the electricians, the plumbers, the people that require industrial-type property. There’s just nothing available,” he said. ‘I’m gonna lease this out pretty cheap just to get the ball rolling, but we need an investor to get it all going.”

He’s estimating it will cost $4 million.

“Can I get the money, yeah. Do I want to put the land up? No. It’s just too big. At this age, I don’t want to take on that kind of responsibility. You’re talking a 30-year loan.”

He already has about a dozen businesses in the current traditional spaces, from automotive to landscaping, air-conditioning repair, towing, construction and real estate.

According to his container plans, a 45-by-45-foot space would accommodate two 8-by-40-foot containers with space for walkway, stairs and decking. Three containers on top would provide 1,289 square feet of space with a view of the mountains. 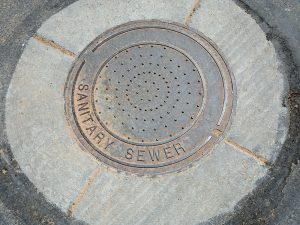 For that space, he sees combined law offices, combined insurance offices, even call centers. He also thinks Maricopa is in desperate need of a trade school.

APEX’s future plans include a permanent clubhouse with restaurant and pool, and garage condominiums for those sports cars.

The company hauls in water and has portable toilets.

“We will be able to put septic in if we need to, however, we’re confident that Global and the City are on the right path with this project,” Williams said.

The financial impact of waiting for the federal process could be deep. APEX had a much slower start than its investors anticipated because of lawsuits apparently sourced by a competitor. With millions on the line, that legal wrangling did nothing to speed up applications and permits.

Buessing, who has been in Maricopa since 1985, has completed work he calls “phenomenal” in the past year but also considers it slow progress. He cannot tussle with Global Water over its services until its services get through Ak-Chin. He has a long-range view of the situation.

“What I’ve found in the city is if you do something right, they flock to it. If you do it half-a**ed, that’s just the response you get,” he said. “It’s a game. It’s all going to come to fruition, it’s just a matter of when.”