What would be the first master-planned residential development in Maricopa in years is a reminder of how the city’s development started.

“It will probably be the most exciting project that we’ve done in a long time anywhere,” said Mike Ingram, founder and chairman of EDH. “It’s going to have more amenities. It’s going to be a great new addition.”

El Dorado Holdings launched Maricopa’s first residential subdivision of Rancho El Dorado, with the first homes and golf course in by 2003, followed by The Villages and The Lakes. The planned main entry to Eagle Shadow off Honeycutt Road will have similar linings of palm trees but with a six-foot statue of an eagle.

According to Chris Grogan, a partner at El Dorado Holdings, 320 acres will be in four or more sections. The full property is between Honeycutt Road to the north and Maricopa-Casa Grande Highway to the south. It is west of Rancho Mirage Estates and Sorrento and east of the City Hall property.

“For us, it really tells the story of why City Hall located where they did,” Grogan said. “We bring our investors down there, we bring outside interests down there, and say, ‘This is where great employment can go.’ They say, “Why did they build themselves out on the edge of town?’ But when they look at the aerial, they see what else is out there in East Maricopa.”

All current residential construction is filling in existing subdivisions. Most other planned housing in town is for single- and multi-family rentals. Despite the pandemic, Arizona home sales have continued to be hot, much to the surprise of homebuilders and other market watchers. 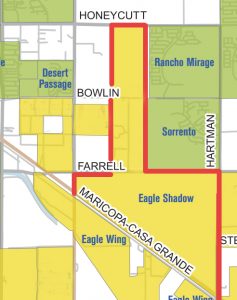 James ‘Nate’ Nathan, the land broker who helped El Dorado Holdings develop Maricopa all those years ago, is on board with Eagle Shadow, too.

“We’re going to trigger that. We’ll have that sold out in two weeks,” Nathan said. “I think we’re going to be re-energized the next few years.”

Eagle Shadow will be rectangular in the north and somewhat triangular in its southern acreage.

Grogan said the northern section will have a recreational area that includes a lap pool, catch-and-release fishing lake with boardwalk, basketball court, ramadas and general parkland. The southside will have ball fields, more basketball courts and a large ramada.

A gated community is not planned, but it has been discussed with homebuilders. The largest, 80-foot-by-130-foot lots are conceived to be in one area off the main parkway, and that small section could conceivably become a gated community within the larger subdivision.

Recession prevented the development 13 years ago.

“We had it ready to go in 2007,” Ingram said. “Now the City has changed a lot of their requirements, so we’re back having to spend a lot of money again to update everything.”

Global Water is also requesting water lines be installed under the street rather than behind the sidewalks.

But what else has changed in the intervening years is the floodplain. Now, Santa Cruz Wash is a main feature of the property, and a pesky one at that.

“Eagle Shadow was not zoned to be in a floodplain at that time,” Ingram said. “Later on, they revised their maps. They’re working on a regional solution. If they can get that done, we can go faster. While they’re doing that, we’re having to do temporary solutions to take our property out of the floodplain.”

That includes spreading water over the land with catch basins.

“The thing is, we’ve got to get our CLOMR,” said Ingram, referring to the conditional letter of map revision, part of the FEMA process. “If that floodplain wasn’t there, we could be up and breaking ground in four to six months. The CLOMR is probably going to be year. We’re ready to go. We’ve got builders ready to go.”