Music, a bounce house, dunk tank, food and beverages, as well as vendor tables will be available to attendees to peruse on Saturday, May 11, from 8 a.m. to 2 p.m.

The event, sponsored by Mountain View Community Church, will take place at the church located a few miles southwest of Maricopa at 50881 W. Papago Road.

Jim Shoaf has operated the food bank since 2016 and said money raised at the event will help volunteers provide more food to the community. Funds raised will also help the organization begin a maintenance schedule on the food bank’s equipment and assist in getting refrigeration units running.

Maricopa Pantry provides not only food to local families in need, Shoaf said, but other commodities and essential needs.

“We do what we do because of our love for God and mankind,” Shoaf added.

The food bank operates most Saturdays at the church and at the Maricopa Unified School District Administration Building, 44150 W. Maricopa-Casa Grande Highway.

The Merriam-Webster dictionary defines neighbor as “a person who lives next to or near another person.” For one group of Maricopans, the word carries a much looser definition that extends far behind immediate proximity.

Recently, in an effort to help their “neighbors” along the Gulf Coast of Texas affected by Hurricane Harvey, several benevolent characters from around the community have stepped up to provide relief to the devastated communities near Corpus Christi.

The organization Copa Central Command, orchestrated in large part by Jim Shoaf, director of the Maricopa Pantry, has set out with the goal of raising ten truck-loads worth of goods to take to the storm-ravaged communities.

Shoaf said he feels for the communities near Houston and in other places where flood damage has reached near epic proportions. However, he said, Harvey’s eye made landfall just east of Corpus Christi, near the city of Victoria and those people will need just as much help as Houstonians.

“Houston is getting the attention of the world,” Shoaf said. “Even when I speak of Rockport here [in Maricopa], in the newspapers they’re writing down that we’re going to Houston.”

The Rockport and Corpus Christi are three to four hours south of Houston.

Hoping to leave Sept. 26, the convoy will take as much food, water and household goods as they can.

But, Shoaf said, there is another aspect to the expedition. He plans to bring volunteer-contractors and craftsmen with tools and light construction equipment to help with repairs and the removal of debris. 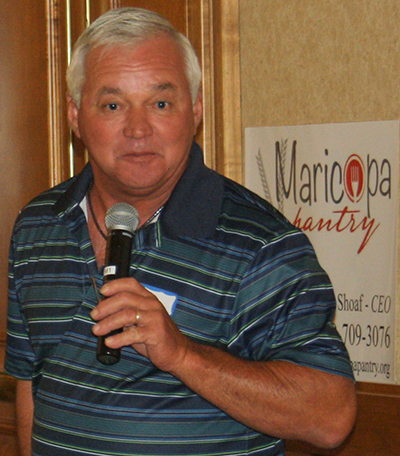 “We’re hoping to go down prepared for just about anything,” Shoaf said. “We don’t want to just hand out food; we want to work.”

Shoaf has a few familial ties in the area of Rockport, a city also caught in the eye of the hurricane. Luckily, he said, they avoided much of the devastation and plan to help coordinate things on the ground when the convoy arrives.

The current plan is to head right for the heart of the destruction. Shoaf said things will likely change when the boots hit the ground and thus the group must be willing to adapt.

“We’ll go wherever they need us,” Shoaf said. “We need to be prepared, we need to be flexible.”

Putting together a huge project like this can present logistical issues, Shoaf said. So, he wants to encourage people to not only consider donating goods but to also consider donating cash to help pay for fuel and to help feed the volunteers.

“It’s smart to make sure we’re ready for the trip,” Shoaf said about needing the funds to support the endeavor.

These kinds of events can unfortunately bring out fraudsters and thieves, Shoaf warned. Considering that, he has made sure that anyone accepting donations on the organization’s behalf has been vetted and is in possession of documentation that proves they are part of Copa Central Command.

Currently, Copa Central Command is taking donations at several locations around the city, including the InMaricopa office, Raceway Bar and Grill and Maricopa Water and Ice. For a full list of drop-off locations and recommended donations see the list below.

Cash donations can be made directly or via a wire transfer into an account held at Desert School Credit Union under the name of Don Herron Relief Fund for Texas (account number 14006873620001).

Shoaf said he appreciates all donations, but he stressed he wants to bring as much new stuff to Texas as possible so people will remember the generosity of Maricopans. Monetary donations help ensure this.

“When we see that lady come up with that baby and that blanket is all torn, I don’t want to give her a used blanket,” Shoaf said. “I want to take it [sic] and wrap her baby in a brand-new blanket, so that she knows the people of Maricopa have a heart and care about them and their community.” 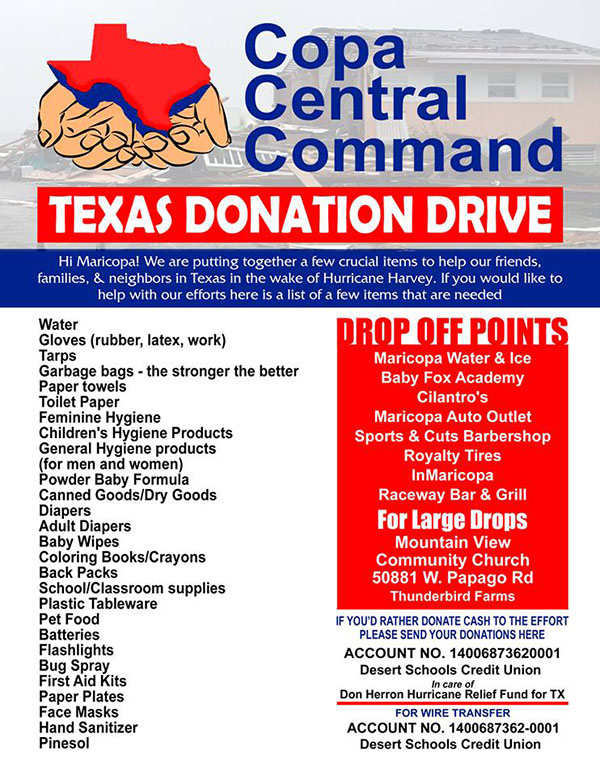 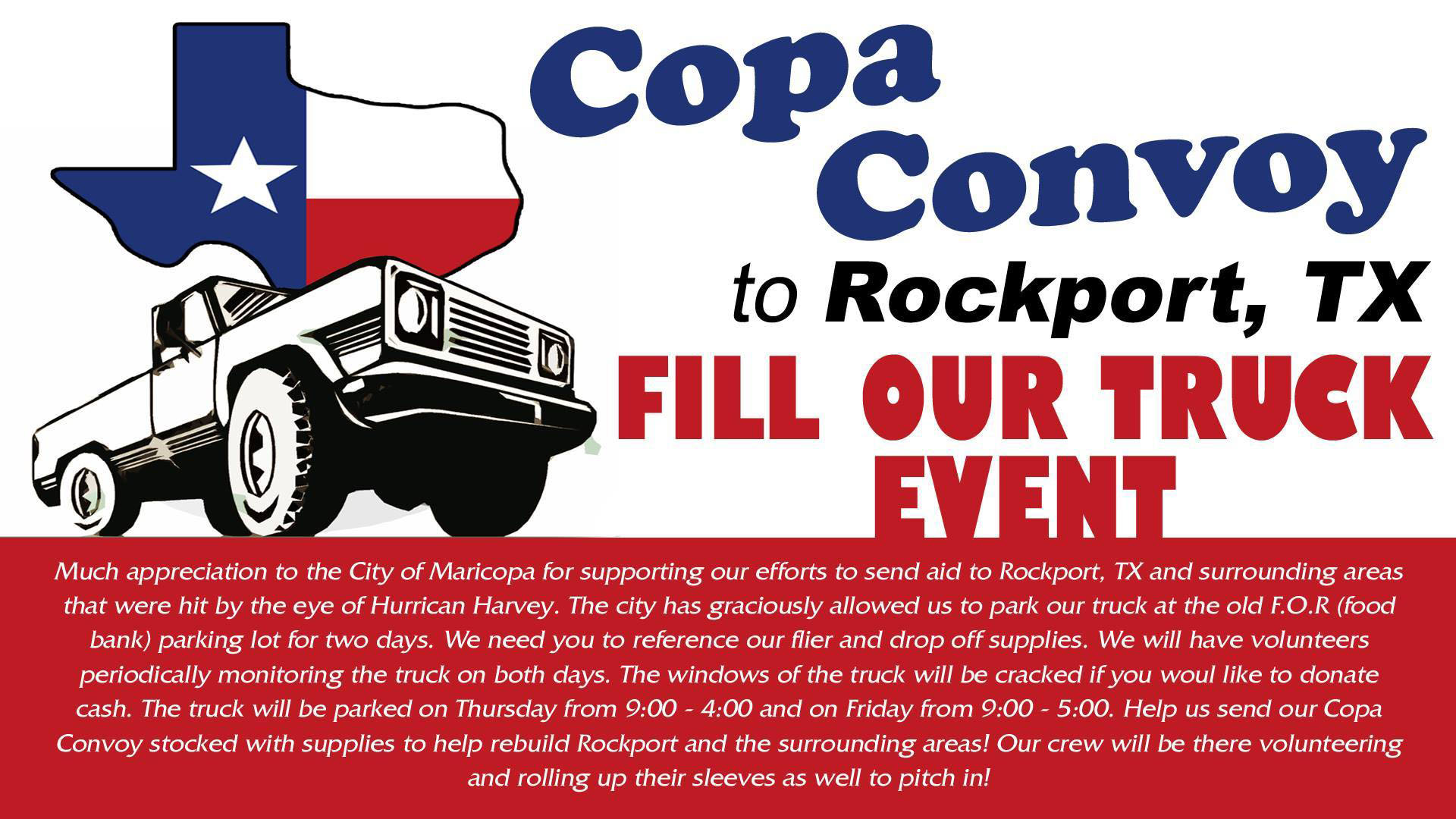 When Jim Shoaf was just a boy, he gravitated toward the kids that his peers often picked on or disregarded. His best friend had mental disabilities, and Shoaf regularly protected a fellow student in special education who was often the target of bullying.

“I don’t like to see people hurting,” Shoaf said. “It always bothered me.”

Today, many Maricopa residents know Shoaf by his silver pickup truck and trailer – often seen carrying food – and hope – to those in need.

“Everybody knows who it is,” said Loree Thompson, who volunteers with Shoaf. “He is the food bank guy.”

Shoaf founded the Mountain View Community Church Food Bank 13 years ago out of his backyard and has grown it into a critical community resource with two locations and up to 40,000 pounds of food each weekend it opens.

“Jim is very compassionate, very loving and very caring,” said Renate Chamberlin, a longtime local community volunteer, who presented the chamber award to Shoaf. “He’s somebody you want in your corner because he won’t let you down.”

Although Shoaf has always “had a calling” to help others, it was when he was at his lowest that he found the strength to raise those around him.

About five years ago, Shoaf lost his longtime job with UPS and was left unemployed in his mid-50s. A man of deep Christian faith, he trusted God, but couldn’t understand why it happened.

“I was sort of angry with God because I worked hard, I was good to everybody and I (still) lost my job,” Shoaf recalled.

Then Shoaf suffered an even greater loss. After years of battling addiction and even serving jail time, Shoaf’s son David finally turned his life around during the summer Shoaf was out of work. Shoaf reconnected with his son, who lived in Kentucky, and the pair “patched up the sorrows.” But then tragedy struck and David was killed that fall in a car wreck.

“It was terrible,” Shoaf said. “My hair went gray overnight.”

Shoaf and his wife Alice received their son’s remains on a Thursday and shortly after received a call that a truckload of food was coming in.

He added, “We had the funeral on Sunday and gave out food and roses on Saturday.”

The timing of the roses and the hope they brought to both the Shoafs and those they served reminded them that they needed to keep doing the work they believed in.

Shoaf accepted a job as a school bus driver with Maricopa Unified School District, where he continues to drive today. The district has become a food pick-up location for those who visit his food bank, while the students have given hundreds of volunteer hours and raised spare change.

Many supporters of Shoaf’s food bank said they choose to support it because Shoaf places no restrictions on who can receive assistance. He also finds ways to support people in need of other items, locally and in other states, and even other countries. If there is a way to help, it’s safe to say Shoaf will find it.

“If someone needs food, no matter what their stature was last week, if they are in need of food, he is willing to get it for them,” said Chris Cahall, owner of American Family Insurance and supporter of Mountain View Community Church Food Bank, which also utilizes F.O.R. Maricopa’s resources.

Cahall and those like him are critical supporters for the food bank, which faces a new challenge of obtaining enough food to feed those in need, Shoaf said.

In recent months, discount food stores bought up much of the food Shoaf could formerly purchase, making it hard for him to obtain the quantity of food at the prices he used to pay. His longtime model at the food bank has been that a needy family is asked to donate $10 to receive $40-$50 worth of food. Since most families cannot afford the donation, Shoaf gives them the food anyway and is able to rely on the support of donors in the community and at the church to make up the difference.

But with food prices rising due to the demand of the discount stores, he is in need of more support from Maricopa’s business community.

“I’m going to start asking the businesses for support,” Shoaf said. “I know if I can get the right sponsors to donate in Maricopa, I know I can compete with the dollar stores.”

To help bridge the gap in the short term, Shoaf has gotten creative at finding ways to obtain food. He gathers extra food from stores in town and collects donations. He even donated $1,000 of his own money to buy 350 turkeys over Thanksgiving. The money he donated was also enough to obtain 250 hams for Christmas and a case of chicken.

“We still have trouble paying the bills at the food bank,” Shoaf said, “but we get them paid somehow.”

Shoaf, a father and grandfather, said he couldn’t do much of what he does for the community without the support of his wife of 38 years. Together, the couple does more than just feed the hungry – they feed their hearts.

“Food banks carry a stigma,” Shoaf said. “We try to make it a friendly experience and carry the food out to their cars and talk with them. … I know about their husband with cancer and little girl who has had heart surgeries … we take the time to get to know them.”

He added, “There are a whole lot of people out there who just need somebody to show them they care and I’ve spent my whole life doing that.”

This story appeared in the June issue of InMaricopa.