Senior Tylen Riley-Coleman, who had already been on the medal stand earlier in the week with a fourth-place finish in shot put, pulled off a massive upset in the discus. His second-flight throw of 172-08 was more than 20 feet farther than his previous best of 150-09 and more than three inches farther than his closest competitor in the finals.

“I don’t know where that came from,” said Coleman, who had yelled in elation after hearing the measurement. “I’m just blessed.”

In the first round of competition Saturday, he had been more than thrilled with a throw of 163 feet, which came between two fouled attempts. But the second-round throw catapulted him to the top of the medal stand, an unfamiliar position for the football star.

“I don’t know what to do with myself,” he said.

Even in practice, he said, he had not gone beyond 150 feet with the discus. In fact, shot put has usually been his stronger event. Parker Bays of Ironwood Ridge had been a heavy favorite but finished third.

By scoring a personal best in the discus, Coleman set another school record. He also holds the MHS record in shot at 52-9.

At any other time, MHS senior Logan Taylor’s result in the hurdling events would not have been surprising, but Saturday was not like any other time.

Taylor, the school record-holder in both the 110-meter and 300-meter hurdles, had finished fourth and fifth, respectively, in those events in last season’s state championships. His goal was gold this year.

That seemed to get scuttled this week when he opened a gash on his right knee that required 20 stitches. His family and head coach Corey Nelson left it to him to decide if he would compete in the state meet.

Taylor is known for challenging himself and did so again in the 110-meter hurdles, shouting out as he crossed the finish line in front. Main rival Jadon Pearson of Williams Field had crashed out midway through the event and did not finish.

“I wanted to run my best race,” Taylor said. “It was probably going to be the last one, so I wanted to make sure it was good. I’m really happy with how it turned out.” The knee, however, did not hold up through his effort in the 300-meter hurdles. Though he leaped out to an early lead, he struggled down the stretch to finish sixth in 41.07 (his top time is 39.09). His father helped him off the ground at the finish line and to the trainer’s tent for treatment.

Meanwhile, MHS’s sprint master Jacob Cowing, who earned gold last year as part of the Rams 4×100-meter relay team, had his hands full with Trayvion White of Sahuaro. In the 100-meter dash finals Saturday, Cowing matched White stride for stride but finished second at 10.78 behind White’s 10.73.

In the 200-meter dash, White, Jacob Samford and Cowing all finished within a fraction of a second. White won in 21.65, while Cowing came third in 21.95. After picking up his medal, he had his right thigh wrapped in ice.

The girls’ team did not score points but had two make a good showing Saturday. Senior Kayla Boich was 12th in the high jump finals at 5-00. Sophomore Shakira Gillespie finished 15th in the long jump at 15-10.5. 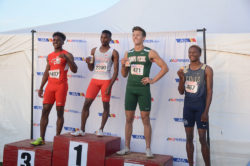 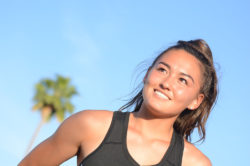 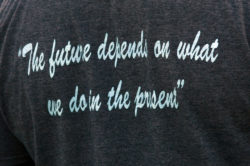 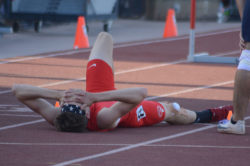 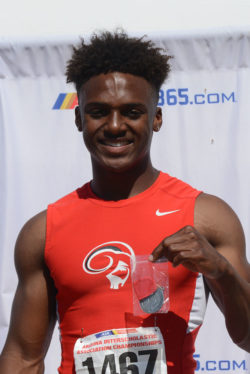 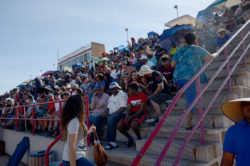 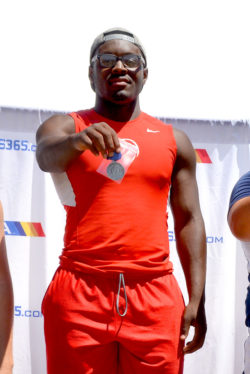 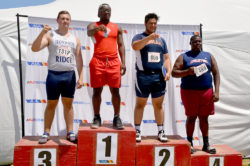 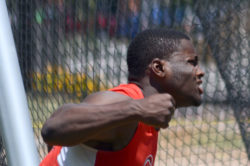 Coleman threw the shot 50-10.5 against his Division II competition. He also finished 10th in the javelin with a throw of 149-07.

Coleman will compete Saturday in the discus finals.

Other Rams competing in state finals Wednesday were junior Katherine Gores, who finished 11th in the girls’ javelin with a throw of 95-10, junior Steel Lewis, 10th in boys’ pole vault in 11-09, and senior Logan Taylor, 13th in boys’ high jump at 5-10.

Taylor was sixth-fastest in the boys’ 300-meter hurdles prelims in 40.16 to qualify for the finals. He will also compete in the 110-meter hurdles finals after running 15.58 to finish eighth-fastest.

The Arizona Interscholastic Association hosted the State Track and Field Championships on May 2-5 at Mesa Community College. The Maricopa High School boys finished seventh in the team standings, and the girls placed 36th. May 10, some participated in the Arizona Meet of Champions. The following athletes set a school, meet and/or state records in their events during the 2018 season:

Terrell Handy soared farther than he ever has, and Maricopa High School came away from the state Division II Track & Field Championships with gold, silver and bronze medals in a team fourth-place finish.

Even in practice, Handy, a senior, had never reached the 47-foot mark in the triple jump. In fact, his personal best this year was 44-10.

But inspired by a huge, late challenge from a competitor (and the silver medal won earlier in the week by his twin brother Darrell in the high jump), he bested himself and everyone else Saturday with a leap of 47-1.5 to win the state championship at Mesa Community College.

From his first jump, Terrell Handy threw down the gauntlet and took the lead with a jump of 45-5, completely new territory for him.

“I had to set the tone,” he said wryly afterward. That sent him into the final eight, and left behind his brother in a surprising reversal.

Then Marana’s Dominic Gehr put up 45-11 in his final jump. Obliterating Handy’s new personal best, that could have taken the wind out of his sails, but his response was the opposite.

“It just motivates me more,” he said.

In his last jump, getting no help from a gusty side wind, Handy put to good use the step work he had been practicing with coach Sheldon Hutchinson to claim the gold medal.

Darrell Handy already had his medal, finishing second in Wednesday’s high jump final. He equaled his season best 6-foot-8. That was behind only Canyon del Oro’s Cameron Crandall, who leaped 7 feet. Terrell Handy was shy of his best in that event, finishing sixth at 6-2.

In the preliminaries, the team of P.J. Austin, Longman Pyne, Jacob Cowing and Frank Jones posted the sixth-best time of 43.09 to earn a place in the final. The MHS relay team’s previous best time of 43.03 ranked them fifth in the state. That did not predict what happened in the final.

Running in Lane 8, the Rams stayed on pace with Queen Creek, which had the lead from the first exchange. Queen Creek went on to win in 42.07 with Cienega just behind in 42.32. With the rest of the relay team running across the field to cheer on Jones in his anchor leg, Maricopa put up its best time of 42.76 for the bronze.

“It was fast,” Pyne said of their unprecedented time. “We always knew we had it [in us].”

Earlier in the meet, Austin finished fifth in the long jump, while Darrell Handy was sixth.

Among the girls, sophomore Italy Brookshire qualified for the high jump final. While not making the finals in the 400-meter dash, sophomore Shannon Coutre lowered her personal record and school record during the preliminaries to 1:00.34.