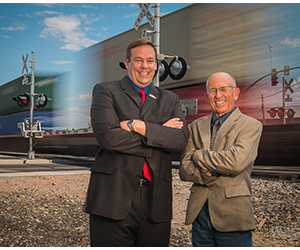 The State Transportation Board voted Friday to put a highway overpass for State Route 347 at the Union Pacific Railroad crossing in the Arizona Department of Transportation’s five-year plan.

Inclusion means ADOT will provide funding for the project – something Maricopa has been trying to secure since the city was incorporated in 2003.

The bridge would eliminate traffic delays and mitigate public safety concerns that exist with having 60 or more trains run through the middle of the city each day.

The 2015-2019 Five-Year Transportation Facilities Construction Program approved by the State Transportation Board includes funding for much of the $55 million State Route 347 Railroad Overpass project:

“We’re very, very excited,” Mayor Christian Price said after the meeting. “This is now officially a real project. It allows for our growth and expansion. The caveat is there is still a lot of work to do.”

“ADOT continues to focus on preservation and protecting our investment of more than $19 billion in the state highway system,” ADOT Director John Halikowski said. “We have also worked closely with the board over the last few months and followed their guidance to move improvement projects forward that are important to the communities we serve and that fit into ADOT’s long-range transportation plan.”

The city has $10 million earmarked for the project and the Ak-Chin Indian Community has expressed its intent to contribute, too, Price previously said. The local funding could speed up the project by as many as three years and mitigate the risk of ADOT not having the necessary funding beyond its current Five-Year Program.***ADVERTISEMENT***

The city continues to pursue federal funding as well. It applied for a Transportation Investment Generating Economic Recovery (TIGER) grant that could bring up to $20 million to the project, he said. The award will be announced in the fall.