It was a pageantry of student success Wednesday night during a presentation inside the Maricopa Unified School District Board Room.

Students from Maricopa Wells Middle School spoke to the MUSD Governing Board about their experiences, some of them life-changing, in programs that ranged from music to drama to athletics. Some of these activities, however, take place after the school day ends, and that is where the issues begin.

MWMS and other secondary schools at the district do not offer transportation to these students due to a lack of grant funding.

“Listening to this presentation tonight … and what Maricopa Wells has done, is nothing short of amazing,” said Board President Patti Coutré. “You can see where they’re heading … and unfortunately transportation is one of the resources they will need to continue without having another grant.”

Principal Rick Abel said families make do by working together to ensure children make it home safely. Coaches are even known to stay until 6:30 p.m. to wait with students until a family member picks them up, Abel said.

In addition to traditional extracurricular activities, MWMS also offers after school academic opportunities like “eighth hour” for students who have fallen behind in their coursework. Abel said the school saw increased attendance in the program when it still had after-hours transportation.

The Board addressed the issue in previous meetings by proposing funding from additional district revenue and has deliberated for weeks on where and how to spend the money.

The district has over $1 million to spend in various categories for the upcoming school year. The figure makes up 3 percent of the district’s overall maintenance and operating budget.

In the most recent proposal, a boost to employee salaries and after-school transportation require the most cash.

Superintendent Steve Chestnut said the transportation cost for the three schools that would use the after-school activity buses would take close to $200,000 of that budget.

Not all board members were convinced of the price tag.

“I would like to see the cost come down,” said Board Member Torri Anderson, who consistently advocates for higher teacher salaries during meetings.

Out of 18 proposed expenditures, making “progress on employee pay” is the most expensive category for next year’s budget. 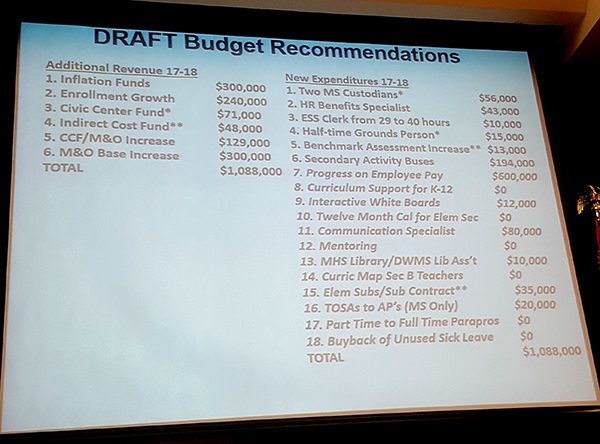 The board’s proposal allocates $600,000 of the additional revenue to district personnel, which Chestnut said “would be roughly 2 percent increase across the board for all employees.”

However, Anderson thinks the district can do better.

“I would love to be the highest-paid school district in Pinal County. Then we’ll have a waiting list of teachers coming to our school district,” Anderson said.

Board Member Joshua Judd said the board needed to find a “happy balance” between the two categories.

The board tabled the draft budget for an upcoming work session. Chestnut said he expects the board to confirm an official budget by late June or July.