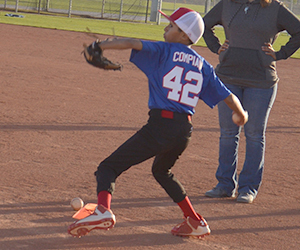 It is officially baseball season in Maricopa as the city hosted the annual Major League Baseball Pitch, Hit and Run competition on Wednesday.

The wind was howling and the temperature kept dropping, but nothing was going to stop the young baseball and softball enthusiasts of Maricopa from competing in the Pitch, Hit and Run competition at Copper Sky Recreation Complex Wednesday night. Young athletes ranging from 7 to 13 years old came in high numbers to compete in the annual skills competition.

Parents were able to take their mind off of tax day as they watched their kids compete in pitching accuracy, base-running speed, and hitting distance. The athletes were split into four age groups (7-8 year olds, 9-10 year olds, 11-12 year olds, and 13-14 year olds), and each group had their own awards.

Participants were able to win an award for pitching champion, hitting champion, and running champion. The all-around champion was decided by the amount of points each participant earned across all aspects of the competition.

After the scores were tallied, a few athletes stood out and won in multiple categories. However, 21 participants received awards.