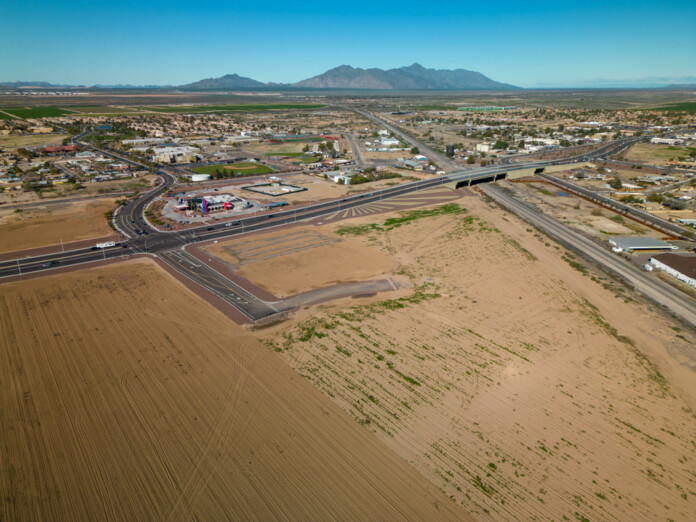 Nearly a year after City Manager Rick Horst confirmed a major retail development was coming south of the State Route 347/John Wayne Parkway railroad overpass, not a shovel of dirt has been turned.

However, city officials say the development, slated for the east side of John Wayne Parkway, is still coming although the city is taking a bit more measured position now.

“The proposals for this area were conceptual plans when they were previously presented and they remain conceptual plans, as no agreements have been finalized,” said Quinn Konold, communications director for Horst’s office. “The area currently includes zoning for commercial use and currently that is the vision and goal for its development. We look forward to sharing details on the development at the appropriate stage.”

Horst discussed access to the area during Tuesday’s City Council meeting during a presentation about the Overland Waterman Butterfield apartment project, which is in the process of obtaining various city approvals. The 574-unit community, the city’s largest, would be directly east of the proposed site of the commercial development.

“This became possible because when we took over John Wayne Parkway (from the Arizona Department of Transportation) we were able to control the land under the overpass,” Horst said. “We had approached ADOT previously and they were not supportive of it. But now that it’s our property we are able to move this along.

“We are actually hoping to extend that road (an access road between the apartments and the railroad tracks) underneath the overpass so that citizens from that side can easily get to the retail area, which is forthcoming, so they don’t have to burden the main intersection.”

That area south of the overpass and east of John Wayne Parkway has been a prime target for commercial development for years. Speculation about major retailers such as Target, Kohl’s, Home Depot and Lowe’s has been rampant, but no deals have been signed.

If and when construction begins, the project would be a huge economic boon to the city, keeping discretionary dollars in the local economy and boosting the city’s tax base.

Several mentions of the center were made during the City Council meeting.

The apartment project’s early plans include street alignments, pedestrian access and other items that would make it easy for its projected 1,900 residents to access their neighbor’s stores, restaurants and shops.

“Access will be from State Route 347 via Honeycutt Avenue, and the city will be constructing out Honeycutt Avenue to the east and then down to the south that will connect and dead end to the site,” Scheerer said. “It will provide access to John Wayne Parkway for the site and then to the future development of that vacant area there (the proposed commercial site).”

“There will be a walkway trail system that will go to the new pedestrian overpass, and people can walk to the retail center,” Scheerer said.

When the center initially was announced, Horst said the city had a developer in place and “dozens” of shops and retailers had signed letters of intent, with other joining the center at a rapid pace.

“Timelines move and this is not locked in, but we think they could start (construction) as early as September or October (of 2022),” Horst said at the time. “It’s in the area we call the New Maricopa Station, all that dirt on the east side of John Wayne Parkway.”

“To the west of the project site is city property expected to be developed as a retail site with varying uses, while a single-family residential community surrounds the east and south of the project site,” the document said. “This submittal respectfully requests that the City of Maricopa consider amending the General Plan Land Use Map to modify the existing Land Use Designation on the 20-acre site from Employment to High-Density Residential in order to develop a multi-family residential community with a variety of residential product types to complement the future retail use to the west and existing single-family residential uses to the south and east.”

A photo gallery of the location.