Millions of dollars are about to be invested into the Copper Sky Commercial District. 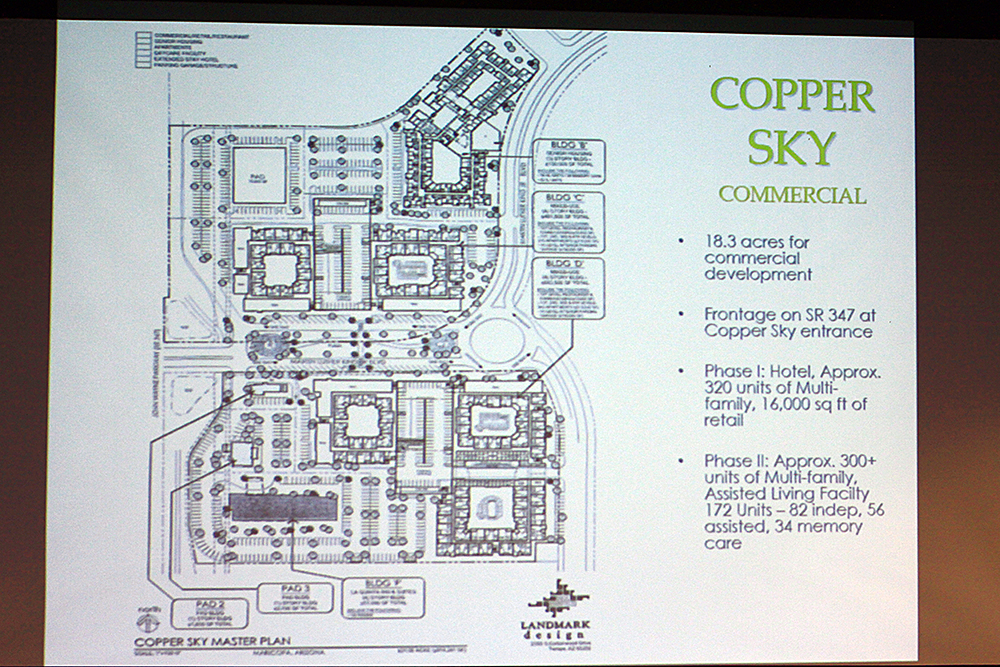 “The southern parcel will include a hotel with about 85 rooms,” Airheart said. “That is going to be the very first project on this site. Phase one will continue to include about 320 units of multifamily housing and then retail with about 16,000 square feet.”

She said the northeastern corner of the development will also include assisted living housing.

“This is a segment of our population that we are not able to cater to today,” Airheart said. “The developer that we are working with is interested in being in and out with construction within three years. The developer is investing money and he also has to work to attract investment dollars to this project. We hope this will go on to expand the critical relationships that we are working on.”

Airheart said La Quinta Hotel is a $10 million private investment and will be four stories tall with 89 rooms. It will have a $1 million annual operating budget and create 20 jobs according to Airheart.

She said it will provide an annual payroll of $390,000 to the local economy, as well as property, bed and sales taxes.

Hopes are the hotel will be operational by the end of 2020.

Those attending the MEDA meeting were extremely excited by Airheart’s release about the development.

“Ummm, so this is confirmed?” one man asked.

Airheart replied it was about to become reality and the developer is ready to start on the project soon. Businesses going into the open retail spaces at the new development will be “market-driven.”

City Manager Rick Horst told the crowd the developer of the hotel is Shea Connelly Development, a national developer with a long and prestigious track record.

The hotel is separate from the multifamily housing and retail complex going into the Copper Sky development. Airheart said the same developer has built a similar project in Fountain Hills.

The Copper Sky Commercial District will include a $100 million private investment into a complex with 53,000 square feet of retail space and provide about 150 new jobs.

The Copper Sky development is almost twice the size of the Fountain Hills development.

The proposed Morning Star assisted living facility is a $30 to $35 million private investment providing 172 units with 82 as independent care, 56 as assisted living and 34 dedicated for memory care. Morning Star is expected to provide 225 jobs to the Maricopa community, according to Airheart.

She provided images of the company’s development at Fountain Hills showing a large and luxurious 91-unit care center that is nearly half the size of what will be built in Maricopa. Fountain Hills was a $21 million investment.

Horst said, in all, the new development could house up to 3,000 more people and will leverage larger events to come to Maricopa, increasing tourism and jobs.