In 15 seasons as an NFL defensive lineman, including a final season in 1990 for the Phoenix Cardinals, Carl Hairston attributed his success to a simple formula — prepare, play hard, outwork the man across the line of scrimmage and never, ever quit.

Hairston, 68, also coached professionally for 20 years following his playing days. His final stop as a coach was with the BC Lions of the Canadian Football League, from 2012-2014.
Following his coaching days, Hairston returned to the Phoenix area, moving to Maricopa earlier this year. He and his wife, Cynthia, have been together since his final season as a player with the Cardinals.

“I enjoy being home and enjoy retirement,” Hairston said. “We fell in love with the model home here (in Province) and the community. The hardest part about retiring initially is the body starts to slow down, but the brain does not and keeps going.”

Hairston “kept going” throughout his underdog career. The Martinsville, Virginia native didn’t play football until his junior year of high school. Upon graduation, he worked as a chef and truck driver, among other jobs, to support his family before he was approached about going to college at the University of Maryland Eastern Shore (UMES).

Hall of Fame offensive tackle Art Shell was among the previous players at Eastern Shore before it dropped its program in 1980; both he and Hairston wore No. 78.

Not in football shape, Hairston quit after the first day of training camp at UMES but was enticed to return. When the coach worked him hard to make him pay for his initial decision to leave, it rounded Hairston into condition and formed the basis for his future success.

Hairston averaged an astounding 20 tackles a game as a senior. In both his junior and senior campaigns, he finished runner-up as conference player of the year to future Hall of Fame Giants linebacker Harry Carson.

“Our last two years, we were 0-20,” he recalls. After playing linebacker and tight end early in his career, he became a fixture at defensive end. “I just tracked the ball wherever it went. That’s what caught the Eagles’ eye — how I worked and never quit.”

Ironically, the Giants selected Carson in the fourth round of the 1976 draft and intended to take Hairston in the seventh round before the Philadelphia Eagles moved up.

The 6-foot-3, 260-pound Hairston was the final player to make the team. When first-year coach Dick Vermeil told Hairston he was going to take a chance on him, the player replied: “You won’t regret it.”

Hairston went on to play or coach in all 240 games of Vermeil’s career and the two remain very close to this day.

“Carl could win a game ball every week,” Vermeil has said of Hairston.

In his eight years with the Eagles, he started 106 of the 116 games he played. Quarterback sacks were not an official NFL statistic until 1982, but Hairston recorded an NFC-leading 15.5 sacks in 1979 and 57.5 sacks overall. In the 1980-81 season, Philadelphia defeated rival Dallas in the NFC Championship game before losing to the Oakland Raiders in Super Bowl XV.

“We only had two first-round picks in the starting lineup, but we jelled as a team,” Hairston recalled of that special Eagles squad. “We were over-hungry and just went flat (in the Super Bowl). In my heart, I wish every player could experience (playing in that game) as the whole world is watching those two teams.”

Hairston was traded to Cleveland (after Vermeil retired in 1982) for a ninth-round draft choice despite having his leg in a cast at the time following a serious knee injury. “I almost retired after they cut off the cast and I saw how long the scar was,” he said.

Old friend Marty Schottenheimer (who wanted to draft Hairston while with the Giants) was the Browns coach. He told Hairston to rehab and then help teach the younger players. The defensive end went on to start for most of his six years and record another 37.5 sacks. His 15-year career then ended in Phoenix.

The secret to his longevity?

“The one thing you’ve got to do is work harder than the guy across from you. You’ve got to outwork your opponent for four quarters,” he explained, adding that many of his sacks came in the final period of games as he outlasted the other team.

Hairston said he played for outstanding coaches through his career — from Vermeil and Schottenheimer to defensive gurus Bud Carson and Marion Campbell. “I was in a system that always depended on defensive linemen making plays,” he said. “We practiced hard to make that happen.”

Too many teams today, he said, have defensive linemen who “can’t run; they just occupy blocks. They get knocked back, then can’t make plays.”

Seattle and Tampa Bay are two exceptions, he noted.

The day after he retired, Hairston became a college scout for the Cardinals. His initial coaching role was with Kansas City (the first of two stints) in 1994, working for Schottenheimer. When Vermeil returned after a 15-year retirement, Hairston joined him in St. Louis in 1997 as the defensive line coach. 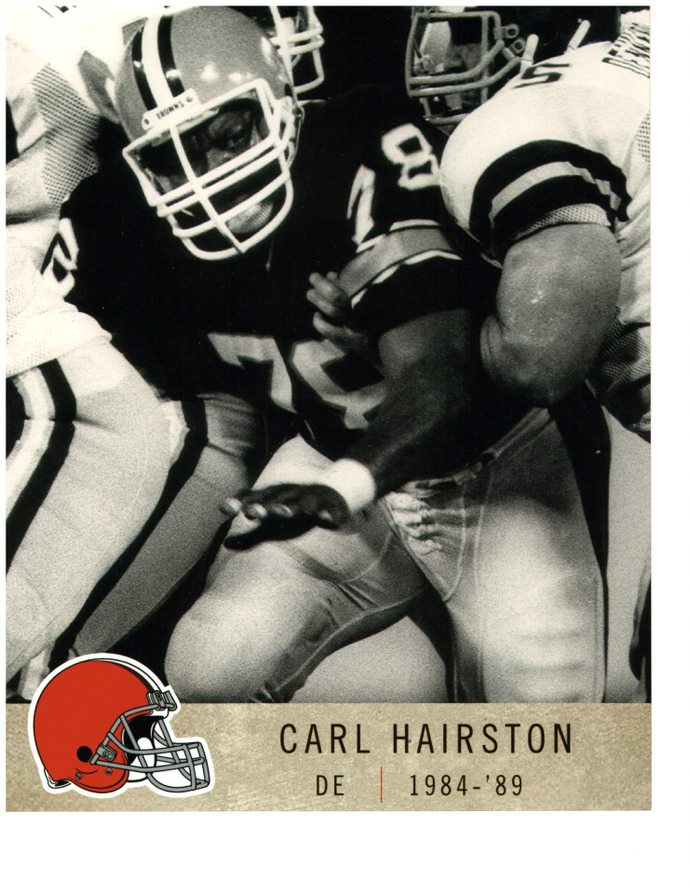 The Rams, with quarterback Kurt Warner, were known as the “Greatest Show on Turf” for their fast-paced offense. Hairston admitted “we used to get mad at the offense because they scored so quickly,” but all four defensive linemen reached double figures in sacks in 1999. The Rams defense made a tackle at the 1-yard line to preserve a 23-16 win over Tennessee in Super Bowl XXXIV.

(Hairston would go on after retirement to coach with Warner for a year at a Scottsdale high school.)

In 2001, he returned to Kansas City as defensive line coach and then went to Green Bay from 2005-2008 before spending time in the United Football League and Canada.
No matter the coaching stop, Hairston carried over many of the lessons learned from his playing days.

“I worked them hard, but I treated them like men,” he said. “We would have two game plans: mine and theirs. I would look at both and see which was going to work best (in that game). I gave them responsibility. It didn’t matter who you were — whether you made $6 million or were a rookie — you had to work hard for your job.”

Pro Bowl defensive end Kevin Carter, one of the sack leaders on the Super Bowl champions, signed a free agent contract with Tennessee in 2001, the same year Hairston returned to coach in Kansas City.

Hairston had a package waiting for him when he arrived. He opened it to find a Rolex watch and note from Carter saying, “Thanks for teaching me how to make $12 million a year.”
Hairston earned $18,000 during his rookie year in 1976.

WORKING FOR A LIVING

While Hairston touted hard work on the practice field and in games, he said it really comes into play regardless of profession. “Every job has work habits; you’ve just got to apply them.”

The game has changed dramatically since Hairston entered the NFL 45 years ago. Full contact practices of 2-3 hours were common. There were six preseason games and very few of the wholesale substitutions that take place today. (He recalled being on the field for all 91 defensive plays one Sunday in Miami).

There is no doubt in his mind that the increase in injuries in recent years are one of the unintended consequences.

“Our bodies were used to contact going into the regular season,” he said. Thursday night games are not a benefit either as the “body has not had time to recuperate.”

When Hairston tunes into games today, he’s watching for technique.

“I watch offensive linemen a lot — their footwork to see if they can move their feet. You can see how they are taught.”

Even in retirement, Hairston remains an excellent student of the game, teacher and ambassador for the sport of football.