Three years ago a Maricopa woman rushed her husband to the emergency room. Doug Urbaniak, 64 at the time, wasn’t feeling well and momentarily lost consciousness.

Once admitted to the hospital, Urbaniak woke up and gave his son a call – but he ended the conversation abruptly.

Urbaniak has been paralyzed from that moment on, his wife Pat Urbaniak said.

“He was talking to his son on the phone in Ohio and all of a sudden he said ‘I think I have to go’; His hand dropped and he never moved again,” Pat said. “It happened that quickly.”

For the first two weeks, hospital staff in Chandler referred to Doug Urbaniak as their “mystery patient.”

Finally, after spinal taps and bloodwork, doctors diagnosed Doug with the West Nile virus, an infection transmitted by mosquitos. A physician said he probably contracted it in the backyard of their Maricopa home, Pat said.

After lengthy hospital stays, Doug was transferred to a skilled nursing facility in Scottsdale for rehabilitation. He would spend almost three years there and regain the use of one arm.

Pat is Doug’s dedicated companion and caregiver. At night Pat is summoned by Doug’s bedside bell every two hours to suction his lungs, which Pat said are also paralyzed.

“When he rings I zoom back out here,” Pat said.

At the couple’s house, Doug enjoys the company of his cocker spaniels and the kind of comfort, Doug said, only being at home can bring.

“There is something about being back at your own place that is more relaxing, soothing – that’s good medicine,” Doug said. “The dogs are very comforting as well.”

But one obstacle has prevented him from one of his most basic needs: bathing.

The Urbaniak’s shower is not wheelchair accessible, forcing Pat to help Doug bathe using the sink and a wet cloth,a process Pat said takes over an hour to complete.

“It has really been challenging,” Pat said.

Pat sought resources to help with the cost of installing an appropriate shower she estimated would have cost her thousands of dollars in labor and supplies. Despite her outreach to county and city agencies, she said every effort led to a dead-end.

“Unfortunately in Pinal County, there are very few services available,” Pat said. “In my effort to try and find services to help remodel the bathroom so he can take a shower, I made I can’t even tell you how many calls.”

That’s where a group of teenagers come in.

Seventeen-year-old Ryan Hahn is a Boy Scout in local Troop 993. He was looking for a project that would help him gain rank as an Eagle Scout. 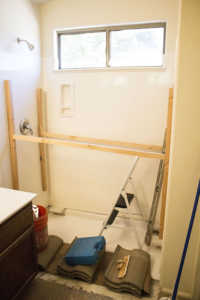 Ryan’s dad Gerry Hahn is the troop’s committee chair. Gerry heard about the Urbaniak’s from a friend and thought the shower installation would be a way for his son to help the community, as well as complete his Eagle Scout project.

Gerry Hahn said to earn rank as an Eagle Scout, scouts are required to plan, develop and give leadership to a project that is of no cost to the person whom it benefits.

The Urbaniak’s shower remodel was also an opportunity, Hahn said, for scouts to participate in a project that is “outside of the box” compared to previous Eagle Scout projects.

In the past, Hahn said, scouts have gained rank by completing various projects in local parks around the city.

“Lately our boys have been doing the same thing over and over,” Hahn said. “I want somebody to do something noteworthy.”

Ryan began fundraising for the project three months ago by holding a car wash and asking for donations from family and friends. The remodel cost nearly $1,000, Hahn said, with the custom shower base requiring the majority of that cost.

The shower base is compliant with the Americans with Disabilities Act, and will allow Urbaniak to shower himself.

“He’ll be able to sit in a shower chair, and I’ll push him in, and he’ll be able to hold a handheld (nozzle) and shower himself. (It will) give him a little dignity,” Pat said.

Last week, Ryan and Gerry Hahn, along with four other scouts, began the remodel.

It took the teens 2.5 days to finish the project that included demolition and the installation of sheet rock, trim work and the shower base.

“It feels really cool to help out people that couldn’t help themselves,” Ryan Hahn said.

For Urbaniak, the new shower not only represents a form of independence, but the project also holds sentimental value to him as well.

“It means a lot because I haven’t had a real shower in several months and it’s very kind of the young man to volunteer to do that,” Doug Urbaniak said. “My own son was an Eagle Scout, so I know what the project means to him.”