“I found my son on May 10 at 3 p.m. in his bed,” Tyler said. “If you guys don’t educate yourselves and your family, you’ll either be at a cemetery or you’ll be holding an urn at the funeral.”

“My heart goes out to the Tylers for the loss of their son Tyler Champagne,” Lamb said. “This is happening way too often. What do I say as a sheriff when I show up at their house, or what does the (Maricopa police) chief say when he shows up at their house?”

Lamb said Pinal County typically has about 750 overdoses a year and the number is growing. He refers to those incidents as “poisonings.” Lamb said in Arizona, 33 children have died of fentanyl this year, seven of them under the age of 1.

Tyler spoke of the destructive nature of her son’s death.

“I was the first one to hold him, and I was the last one,” she said. “He’ll never get a chance to marry, have children, finish school. His life was ended that quick, and in the meantime, it destroyed my whole family. My kids will never have the parents back that they had, my husband will never have his wife back. So just please, please, please, pay attention. These social media (sites), they literally deliver it right to their door, and they
use emojis on Snapchat.”

Identifying qualities
According to the Drug Enforcement Administration, fentanyl is a synthetic opioid that is 50-100 times stronger than morphine.

The drug was originally developed by pharmaceutical companies for pain medication in cancer patients. It was mainly applied with the use of a patch on the skin.

Due to its powerful effects, it’s often added to heroin and other drugs to increase potency.
In many cases, overdose deaths occur when users believe they are purchasing heroin and have no idea it’s fentanyl.

Lucinda Boyd, co-founder of local nonprofit The Streets Don’t Love You Back, said use
of the drug is reaching epidemic proportions. 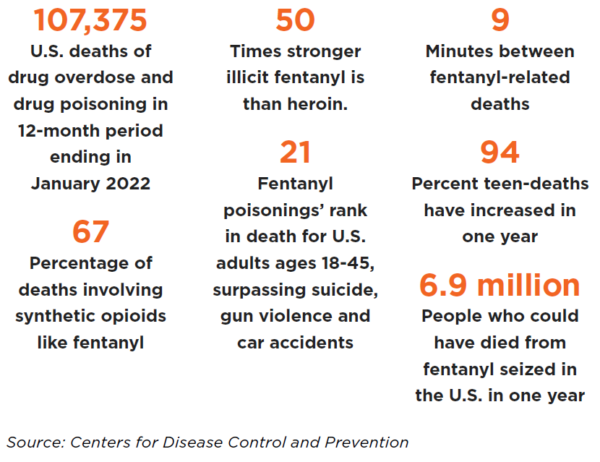 “Fentanyl is the single deadliest drug threat our nation has ever encountered,” she said. “Fentanyl is everywhere. From large metropolitan areas to rural America, no community is safe from this poison. We must take every opportunity to spread the word to prevent fentanyl-related poisoning and overdose deaths from claiming scores of American lives every day. We must stop the stigma, the stereotype, the drug user assumptions and misconceptions that fentanyl poisonings occur only with addicted users. Anyone can die; most are not drug addicts.

“Fentanyl poisoning is real, and our children are dying.”

Spreading awareness
Lamb explained the problem needs attention and should be at the front of everyone’s mind.

“When this becomes the leading cause of death in America, with over 100,000 lives lost in a year, it should be on the front page of every newspaper, on every news station and every politician’s mouth, but unfortunately, it’s not. It’s going unspoken of, and it’s left for us to clean up the mess.”

Tracking fentanyl
Most fentanyl is produced in China. While a portion of it is smuggled directly from China to the United States, most of the fentanyl that makes its way onto the streets in the United States is sent to Mexico and smuggled over the border. While it’s been known to have come in from Canada, that method is less likely than the Mexico route. 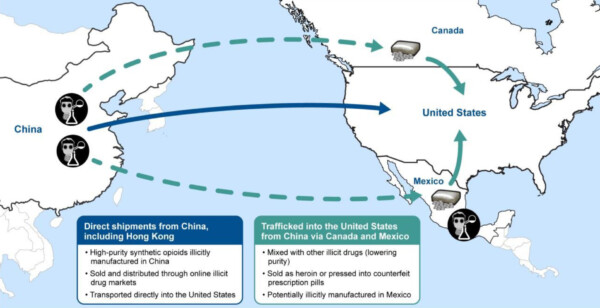