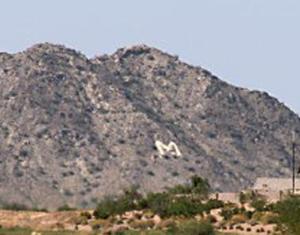 A man was driving east on State Route 347 just outside of Maricopa when his wife noticed a large “M” painted on the side of the mountain.She turned to her husband with questioning eyes and asked: “What do you think the ‘M’ means?”

Her husband looked back, and with great confidence said: “Why, it stands for ‘Mountain,’ of course; what else could it mean.” While the husband’s intentions were good, he was not exactly correct in his assessment.

There’s a unique history behind the large “M” that adorns the west side of Pima Butte. In 1956, voters in the Maricopa region approved the sale of $250,000 in bonds to build a new high school.

The first graduating class chose the school colors: red and white; the mascot, the Rams; and began a freshman initiation tradition of painting the M on Pima Butte.

“That first class really had to do most of the work,” said Alma Farrell, MHS Class of 62. “They had to find the rocks, place them in the shape of an M, and do the first white-wash.” Every subsequent year during homecoming week, the freshman initiation would begin.

“We would auction off the freshmen at the beginning of the week,” said Maricopa Vice Mayor Brent Murphree, a member of MHS Class of 77. “Once sold, the freshmen would have to carry your books, wash your car or do your chores for the remainder of the week.” However, the most significant part of the orientation process was the painting of the “M.”

Toward the end of the homecoming week, all the students and a few teachers would climb aboard a school bus and drive to Pima Butte. “Looking back, it was more of a ditch day, but it was a school-sponsored function,” Murphree said.

The students would form a line leading up to the “M,” with the freshmen — boys dressed as girls, and girls dressed as boys — on the bottom of the mountain and seniors on the top.

Students at the base of the mountain would fill buckets with water from a large water tank brought along for the excursion. Once the buckets were filled, they would be mixed with the paint to create a white-wash and passed up the line.

“By the time the buckets got to the top, there was less than 20 percent of the water remaining,” Murphree said. “It was all about getting wet and having fun.”

Students would dip brooms, mops and anything else they could find into the buckets of white wash that would help them paint the rocks, Murphree said. “I always was at the bottom filling up the buckets, partly because it was my dad’s water truck we brought along.”

The painting of the nearly 20-foot-tall “M” would take several hours, according to Farrell. But the fun would not stop there, she said. When the class was done painting, the remaining water would be dumped into a pit near the mountain and the students would mud wrestle.

“It was great fun,” Murphree said. The tradition of painting the “M” would continue until the late 80s when the Gila River Indian Community Council decided to prohibit anyone on Pima Butte, thus ending the school’s tradition.

“We had a class go to the Indian community council to try to sway their decision, but they were denied,” Farrell said.

Despite being without a fresh coat for more than 20 years, the “M” is still clearly visible today, serving as a reminder of Maricopa’s past.