A Maricopa High School graduate has become an instant impact player for the University of Arizona football team this season.

Through five games, wide receiver Jacob Cowing has 40 receptions for 566 yards (14.1-yard average) and seven touchdowns. He has played a central role in all three Wildcats’ victories through Oct. 1.

The first came during a 38-20 upset of San Diego State in the Sept. 10 season opener, when Cowling caught eight passes for 152 yards and three touchdowns in his UofA debut.

The second came when he caught the go-ahead touchdown pass with 4:53 left in a 31-28 comeback upset win over perennial small-school national champion North Dakota State on Sept. 17.

Cowing, who graduated from Maricopa High School in 2019, seems to make an impact wherever he goes.

The 5-foot-11 junior standout began his college career at the University of Texas-El Paso, where he played immediately as a true freshman, starting seven games. He went on to lead the Miners in receiving for three seasons.

During his third season at UTEP, Cowing caught 69 passes for 1,354 yards and seven touchdowns, the fourth-best single season for a receiver in school history. He was named First Team All-Conference USA and ranked ninth nationally among all receivers. 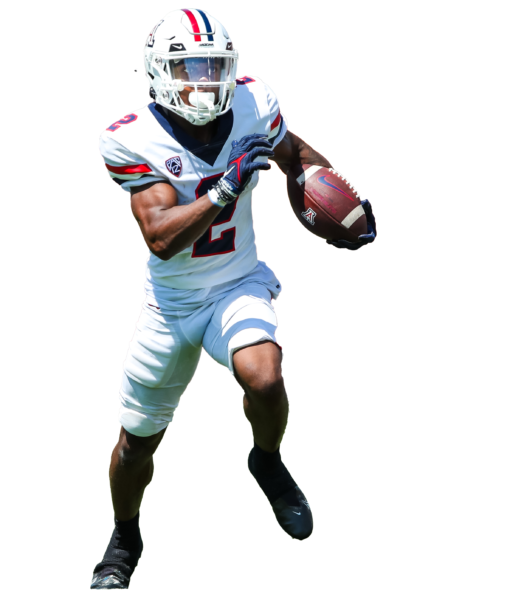 Cowing’s statistics made him an attractive option for schools looking for a strong receiver. When he entered the NCAA’s transfer portal this year, he garnered scholarship offers from Arizona State, Mississippi State, Louisiana State and Arizona.

At the Pac-12 preseason media day in July, Cowing explained what brought him to Arizona: his son Chase and the relationship he quickly formed with Arizona’s new coach Jedd Fisch, who is in his second year and already has tripled the win total from his 1-11 debut season.

It’s about a six-hour road trip from El Paso, to Chandler, where Cowling’s son lives. By choosing the Tucson-based program, Cowing cut that to about 90 minutes.

“I have a little baby boy who just turned 2 in November,” Cowing said, referring to the deciding factor in his school choice. “He’s up in the Chandler area. I just want him to kind of be closer for my last couple years of college so I can see him a lot more.”

Cowing also had a good feeling about Arizona from the start.

“I just had a great conversation with Coach Fisch and [wide receivers] Coach [Kevin] Cummings,” Cowing said. “You know, those guys just kind of made it feel even more like home. One of the biggest deciding factors was having that relationship with the coaches.”

Cowing lived in Maricopa for most of his life. The son of Monte Cowing and Nycole Parker, he has two sisters.

“I’d been there since I was 5 years old,” Cowing said. “I grew up there. I was born in the Phoenix area, so I was kind of familiar with the whole Tucson area, so it’s kind of like home to me.”

While at Maricopa, Cowing was regarded as one of Arizona’s top prep receivers. During his Maricopa High career, he caught 89 passes for 2,065 yards and 21 touchdowns.

This content was first published in the October edition of InMaricopa magazine.