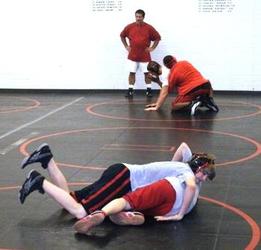 The Maricopa High School wrestling team is working to re-establish its winning tradition that peaked in the mid-2000s.

“As the growth happened in Maricopa, I don’t think wrestling grew with it,” said MHS assistant coach Steve Hull, who acted as a spokesman for the coaching staff during a recent interview that took place while head coach Conroy Bowman was attending another meeting.

With a promising group of 20 freshmen joining an experienced core of returning wrestlers, the coaches are confident that things will begin to change for the better this season, when the Rams will compete for state tournament berths in the Arizona Interscholastic Association’s reconfigured Division III.

“We are really looking forward to starting the growth of building the tradition back to where it should be, starting this year,” Hull said. “We have some kids that have a chance to do real well, and when we get some of these freshmen brought along in the next couple years, we should start competing at a real high level.”

Hull joins the varsity staff this season following a six-year tenure as middle school head coach. Bowman is in his first year as Maricopa’s head coach after previously serving as an assistant.

The Rams’ 36-man roster includes returning state qualifiers Seth Masterson, Adolfo Franco and Joey Kelly, plus several others who have legitimate aspirations to advance from sectional competition to the Division III state tournament.

“I would hope that we would be able to get at least five wrestlers to state this year, maybe more,” Hull said. “I think we have a good chance to get a few placers. We have some young kids that really can step up. I expect the seniors to provide good leadership, and their experience will really help everybody.”

The Maricopa lineup also will feature seniors Bradley Thompson, Sean Dodge and Dre Diaz.
Thompson is a returning starter at 112 pounds, while Dodge is a returnee at 215. Diaz is a heavyweight who transferred into the Maricopa school district this year.

Additionally for the Rams, sophomore Kyle Kingery will compete at 189 pounds while freshman Sky Murcek will line up at 103.

Throughout November, the Rams have been lifting weights, running the stairs of the stadium bleachers and practicing on the mats in preparation for the season.

“It is a very intense workout for a sport,” Hull said. “It is probably the hardest thing some of these kids will ever do as far as athletics in their high school career. I’m obviously not taking anything away from any other sport, but just what is required to be on the mat for six minutes per match is nothing like these kids will do anywhere else.”

The goal of the workouts is to develop skills while building strength and endurance.

“Practices are pretty hard,” Hull said. “We pair them up and wrestle them. They go for four to six minutes before they get a two-minute break, and then they’re right back at it. We do that at the beginning of practice and at the end of practice. In the middle of it, we are working on technique and going over moves that we have already shown them and then adding more in as we go.”

After a month of practice, the Rams will begin their season with a dual meet at Queen Creek on Dec. 2.

The season will culminate with the sectional and state tournaments in late January and early February. The Maricopa wrestlers will compete in a 16-team Division III sectional (dates and location TBA) with the goal of advancing through the brackets and qualifying for the state meet.

“We have our work cut out for us to get these kids qualified for state,” Hull said. “But if they have good years and we get their records where they need to be through the year so we get good draws at sectionals, we have a good chance of getting a number of boys through.”