Everyone has heard that if you stand with a loved one under mistletoe you are supposed to kiss that person, but where did the Christmas connection come from? Historians aren’t sure but the tradition has been around for centuries.

Mistletoe’s evergreen foliage and white berries make a pretty Christmas decoration and the tradition of kissing under it just makes for a romantic encounter!

But did you know that mistletoe’s Anglo-Saxon name means dung-on-a-twig? If you squeeze open one of the berries, you’ll find a very sticky seed. The seeds are covered with a glue-like substance called viscin, so they stick to whatever they fall on. When birds eat the berries then excrete the seeds, the seeds don’t fall to the ground, they stick on the branches of trees, hence the dung-on-a-twig reference.

Once the seeds sprout, the tiny roots are sent into the tree bark’s cambium layer, where it siphons off water and nutrients, which slowly weakens the tree and can eventually kill it. This is why mistletoe is considered a parasitic shrub that can be seen on mesquite and ironwood trees in Maricopa.

Native bees pollinate mistletoe and feed on its nectar. Other insects that feed on and help pollinate mistletoe include flies, ants, beetles, thrips and mites. Many birds eat the mistletoe berries. The Phainopeplas, a silky flycatcher that lives in Arizona, relies almost exclusively on mistletoe for food in the winter.

As a parasitic shrub, mistletoe should be removed from trees. The dense growth of mistletoe can become quite heavy on branches and a large infestation can damage and destroy your beautiful tree. It’s important to remove clusters before they bloom and produce more seeds. Once removed, mistletoe can grow back because its roots grow deep into a tree. The best way to remove it is to hire an experienced tree care professional. 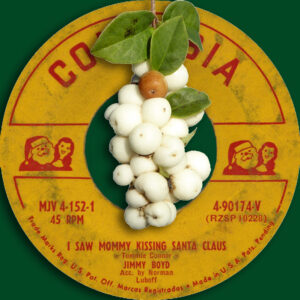 The 1952 hit “I Saw Mommy Kissing Santa Claus,” originally sung by a 13-year-old boy named Jimmy Boyd, is the one of the earliest references to mistletoe in popular music. The holiday staple, of course, has been covered by many popular artists over the years including Andy Williams, The Jackson 5, Reba McEntire and John Mellencamp.

Frank Sinatra wrote and sung about “Mistletoe and Holly” in 1957 and, a year later, the U.S. hit “Rockin’ Around the Christmas Tree” told of couples wishing to stop beneath the white berries.

This column appears in the December issue of InMaricopa magazine.