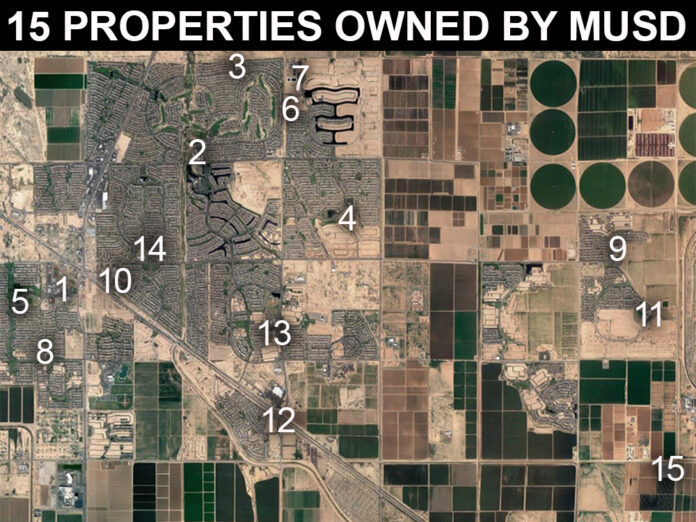 With the acquisition of a 65-acre parcel for its second high school, Maricopa Unified School District now owns 15 properties.

In December, MUSD received $3.54 million from Arizona’s School Facilities Board to buy the Cortona property at the southwest corner of Murphy and Farrell roads near the far east edge of the district.

The SFB is also supplying more than $22 million approved by the state Legislature to help build the school.

MUSD closed escrow on the property Dec. 1, and hydrant flow tests began days later to determine design flow and pressure on the site.

Cortona is the latest in a series of land purchases and donations still in district possession that date back to the 1950s.

Here is a rundown of the properties currently owned by the district:

MUSD’s first school site is now strictly high school property pieced together over the years in the name of Pinal County School District #20. The first high school opened in 1955.

Donated in 2003 by El Dorado Partners, El Dorado Pecan and Pecan Valley Investments, the site is across from The Duke at Rancho El Dorado. The school opened in 2004.

The smallest school lot in the district was donated in 2003 by El Dorado Partners, El Dorado Pecan and Pecan Valley Investments. The school opened in 2005.

CHI Construction acquired this property at Homestead Drive and North Continental Boulevard in 2004 from Homestead Village North LLC and dedicated it to MUSD while never transferring ownership.

In 2004, MUSD acquired the property from Maricopa Meadows LLC in a special warranty deed. Originally on the high school campus, the school moved to the new site in 2006.

MUSD acquired this property south of Placone Lane between Rancho El Dorado and The Lakes in 2004, signed over by El Dorado Partners, El Dorado Pecan and Pecan Valley Investments.

The property was acquired in 2005 by quit-claim deed from Lennar Communities Development. The school opened in 2006.

In 2005, Murphy Land Investors LLC granted MUSD the property in a $10 special warranty deed. Originally on the high school campus, the elementary moved to the new site in 2007.

In 2008, D.R. Horton and Pulte Home Corp. conveyed property to MUSD via special warranty deed for administration offices and the Transportation Department.

MUSD acquired the Tortosa property in 2006 from Murphy Land Investors through a special warranty deed. The school opened in 2008.

In 2007, Elliott Homes gifted the parcel of land on Porter Road to MUSD in a special warranty deed, but Elliott continued ownership until 2014.

MUSD acquired two Honeycutt Road parcels in 2007 and forged them into one for the newest elementary. The school opened in 2008.

MUSD purchased property in December 2020 from Maricopa 240 LLC on Murphy Road. It is planned for a second high school.