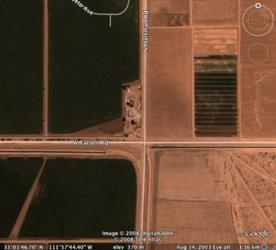 Maricopa Unified School District’s second high school will be located on the corner of Hartman and Farrell Roads.

MUSD governing board members approved a 60-acre land donation for the school from the Eagle Shadow/Eagle Wing development located along the Maricopa-Casa Grande Highway.

El Dorado Holdings, the management company for the future development, has been in discussions with district leadership for the past three years in an attempt to establish a fair voluntary donation for the site. (see related story)

At the last meeting between the two entities the donation was an elementary school site and a middle school site, totaling 36 acres, plus a donation of $300 per rooftop. The board tabled this donation because terms for the release of the money could not be finalized.

However, during this meeting El Dorado Holdings Vice President Linda Cheney overheard discussion about the school’s need for a new parcel of land to build a future high school.

“I got an idea to combine our two developments, Eagle Shadow and Eagle Wing, into a single donation to make the idea work,” Cheney said.

The company had to do some paperwork with the city to get the deal done, but Cheney said the city was extremely easy to work with and helped facilitate the transaction in every manner possible.

At the meeting Assistant to the City Manager Paul Jepson told members of the board that “this was a good deal for all parties and something they needed to get done.” The school board approved the donation by unanimous vote.

While the donation itself is finalized, it could be several years before any true construction begins. Cheney said she doesn’t anticipate home construction to begin until late 2011 or early 2012. It is estimated that Eagle Shadow and Eagle Wing will have a total of 7,100 homes at build out.