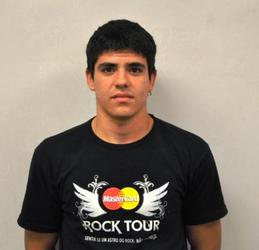 A senior at Maricopa High School, Raphael Dantas said that while his home school near Rio de Janeiro, Brazil, is about the same size as MHS, there are some marked differences.

Additionally, he said, the American school day is longer compared to that in Brazil, where students attend classes from 7 a.m. to noon.

“We just have like five hours,” Dantas said. “You get in the classroom and you sit, and the teachers move. We never move. That’s why we don’t have lockers.”

When Brazilian students return home from school each day, they share a meal with their families.

“Our big meal is not the dinner, it is in the middle of the day,” said Dantas, who has one brother. “We get together, the whole family.”

Asked what he enjoys most about Maricopa, Dantas mentioned fast-food restaurants.

“I like Jack in the Box,” he said, citing the cheeseburger as his particular favorite.

Dantas said he was surprised to see drive-thru windows at banks in Arizona. He said ATMs are available in Brazil, “but you have to walk in the bank.”

Dantas would like to attend college in the United States. He said he wants to visit Mount Rushmore someday, and he also plans to travel to the north to see snow.

During his stay in Maricopa, Dantas has had the chance to play American football. “It’s a really awesome game,” he said. “It’s like a group fight.”

Next: Giacomo Ghigo from Italy