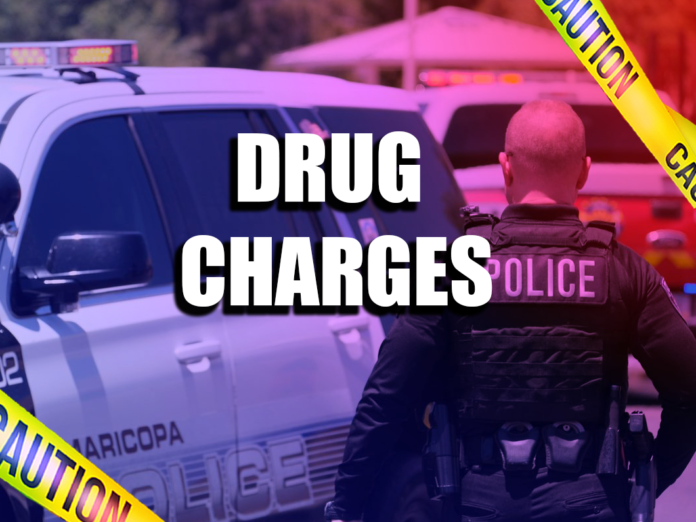 A man was arrested and charged with two drug offenses during a traffic stop.

On March 5, at 5:20 p.m., at the intersection of Edison Road and SR347 southbound, a Maricopa Police Department Officer saw a white 2019 Nissan Altima with no license plate, extremely tinted windows, and no rear windshield, straddling the solid white line. The officer made a traffic stop on the sedan.

The vehicle pulled into the Burger King parking lot located at 20699 N. John Wayne Parkway, the officer contacted the driver.

The officer stated in reports that VanStory was smoking during the entire stop.

VanStory was also extremely nervous, shaking and having a difficult time answering simple questions, like where he was going and why he was in Maricopa. VanStory said his kids live in Maricopa, but he was unable to tell the officer where he lives, police say.

According to police documents, VanStory did not have any proof of insurance, the officer ran the vehicles Vehicle Identification Number [VIN] and the Arizona driver’s license that VanStory provided the officer through dispatch.

While waiting for dispatch to check the VIN information and license status, the responding officer requested for Officer Gomez to respond to Burger King, with a police dog.

Dispatch then confirmed that the vehicle was in VanStory’s name and that his license is valid.

While the responding officer was writing VanStory’s written warning, Officer Gomez did a free air sniff with the police dog, K-9 Karma, who alerted on the vehicle. VanStory told police he did not want officers to search his vehicle, police say.

During a search of the vehicle, police found a broken glass pipe with methamphetamine residue and multiple items the officers recognized as commonly used to make methamphetamine including batteries, hygiene products, and plastic containers. The officers also saw several inhalant cans in the car.

When officers showed VanStory the pipe, he said it was possibly his or his friends, and confirmed that the residue was methamphetamine.

Police tested the pipe at MPD station with a field test, and tested positive for methamphetamine

Typically, MPD would use their TruNarc scanner or send samples to Department of Public Safety for testing, but as DPS stopped testing pipes for residue and the amount was too small for a test with the TruNarc scanner, the officers used a field test.