Ask Maricopans what improvements are most needed in the city and you’ll likely hear a plea to do something about the traffic.

The widening of State Route 347 is often mentioned but another project could also have a huge impact on traffic in and around Maricopa – and perhaps sooner.

The proposed “ring road” around the city would allow residents of outlying communities – Tortosa and Sorrento, for example – to get to SR347 and the Valley without having to drive through downtown. Traffic would move off John Wayne Parkway, lessening congestion on the city’s main thoroughfare, City Manager Rick Horst told city council at a January planning session.

Horst said the ring road would also provide easier access to businesses that will begin to migrate away from the John Wayne Parkway corridor as the city grows and more homes are built farther from the downtown area.

“The road will come down and tie into McDavid (Estates), and of course there’s a new subdivision going in there,” he said in January. “So we have a nice loop opportunity that free flows traffic in all different directions. And right now, the traffic is only going (north and south) because that’s the way the town goes. But eventually there are going to be commercial hubs everywhere, and traffic will re-direct to bring people to those hubs and away from John Wayne Parkway.”

City planners envision a loop routed on these alignments:

According to Mayor Christian Price, even before the loop is completed, the city will see incremental benefits as the project progresses.

“When you’re building a city, you have to do it piece by piece,” he said. “You don’t get the whole picture until the last piece of the puzzle is in place. Let’s say the portion of the bypass north of Cobblestone Farms takes a while. If that’s the case, and that section of the project is the last part we do, we can still move forward on other parts of the project that will allow us to help people move around town in a less frustrating way.”

The city and other entities are quietly making progress in taking these projects from theory to reality. At a joint work session between city staff and the Planning & Zoning commissioners Monday night, city engineer Eduardo Raudales said design of the East-West Corridor from SR347 to Porter Road, projected to cost $24-$26 million, is now 60% complete and the city would be selecting a builder for the project in about the next two weeks.

That leg of the city’s transportation infrastructure is being done in partnership with Pinal County, as it will eventually run all the way from SR347 to I-10. It will begin at the entrance to Harrah’s Ak-Chin Casino and move east primarily along Farrell Road, then connect to the Maricopa-Casa Grande Highway and move east to its terminus at I-10. Raudales said the current anticipation is for that road to be six lanes. 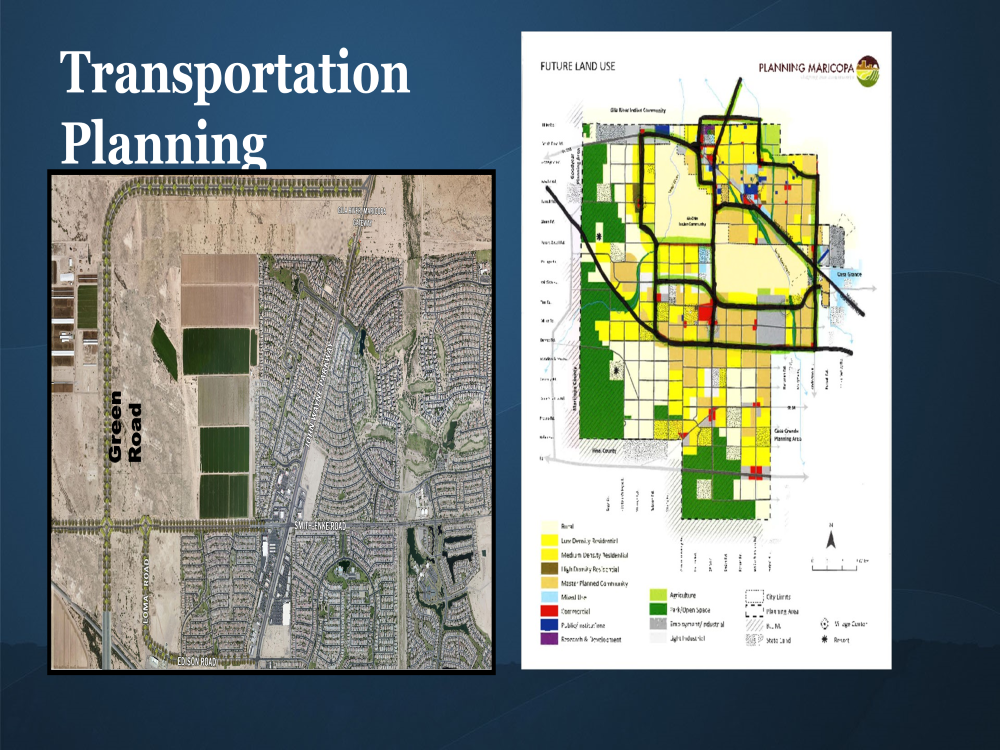 IMPACT FEES TO PAY FOR PROJECT

The city is having discussions with GRIC, the Arizona Department of Transportation and property owners to facilitate the northern part of the Ring Road project, according to Horst.

Horst has said in the past that developers will pay a considerable share of the cost of these projects, particularly the Green Road overpass over the railroad tracks, as they will provide easier access to the homes and neighborhoods built by developers.

“That is absolutely the goal,” Horst said of collecting impact fees. “Homes built in these areas will pay a development impact fee to help pay for and build this overpass. Local taxpayers will contribute too, and if everyone contributes, we will all get something we all can use, and that’s the goal.”

Price said that while progress certainly is being made, he is not willing to commit to a schedule for completion – or even starting construction.

The Green Road portion of the project is more focused, Price said. It will depend on the sale of new homes.

“If they can put 1,000 homes in there and sell 500 in the first year, those fees will allow us to start doing design and engineering work on the overpass and we’ll be saving money in our Capital Investment Program as well,” he said.

Construction of the Green Road project and overpass will be easier than the city’s last overpass project, the bridge on SR347 over the railroad tracks.

“The overpass project on the 347 was dealing with ADOT and federal dollars, so it was much more difficult,” Price said. “The Green Road project will be done solely on city-controlled land so we can go from design to driving on it much, much faster.”

He did offer a possible timeline for that stretch of the project.

“I would think we will be driving over it in no more than five years,” he said. “My hope is that it could be closer to 2½ years.”

If the economy continues to rebound, it will likely be sooner than later, he said.

“When I see that there is a transportation plan in place to deal with the additional 10,000 homes in the Tortosa area and the similar growth in other parts of the city, that makes me comfortable,” she said.

Nathan Steele, the city’s director economic and community development, said that while the city has a vision for how it wants its transportation corridors to look, it is keeping a loose rein in terms of planning.

“Our plans are being kept intentionally vague so we can react to new things that happen along the way,” he said. “We don’t want to get locked into one way of looking at something and not be able to react if an opportunity presents itself.”