One school in Maricopa Unified School District jumped a letter grade in the most recent assessment while another fell a letter grade.

The same phenomenon occurred among Maricopa’s charter schools, with a perennial A-lister falling a notch. Letter grades determined by the Arizona Department of Education are not yet final and can be appealed.

MUSD’s governing board will see a presentation on its results from the 2018-19 school year during Wednesday’s scheduled meeting at the district office.

Letter grades are determined by results of state testing as well as measurements of student growth in a variety of areas.

Pima Butte Elementary School, one of MUSD’s campuses in Rancho El Dorado, is an A+ school and, for now, is the only A-rated school in the city. Butterfield Elementary, which last year had climbed to an A from a C, now has a B.

Despite that, according to data from Principal Janel Hildick, Butterfield’s third and fifth graders saw more than 10-percent growth in English language arts (reading) proficiency. Math results decreased by 19.88 points among third and fourth graders.

Pima Butte, on the other hand, ranks 20th among the state’s more than 1,300 total points earned. Its math and reading passing percentages on AzMerit were among the top three in Pinal County.

Meanwhile, Saddleback Elementary, which had been MUSD’s only elementary school to receive a C for the 2017-18 school year, achieved a B this time around.

While all six of MUSD’s elementary schools are now A and B schools, its two middle schools and the high school remain C-rated.

Among the charters, Legacy Traditional School dropped from an A to a B, but still had among the county’s top AzMerit results. However, Sequoia Pathway Academy climbed from a C to a B. Leading Edge Academy maintained its B-rating.

Wednesday, MUSD Teaching and Learning Director Krista Roden and Assessment and Technology Director Dennis Koch will discuss the results with the district governing board. The meeting begins at 6:30 p.m. 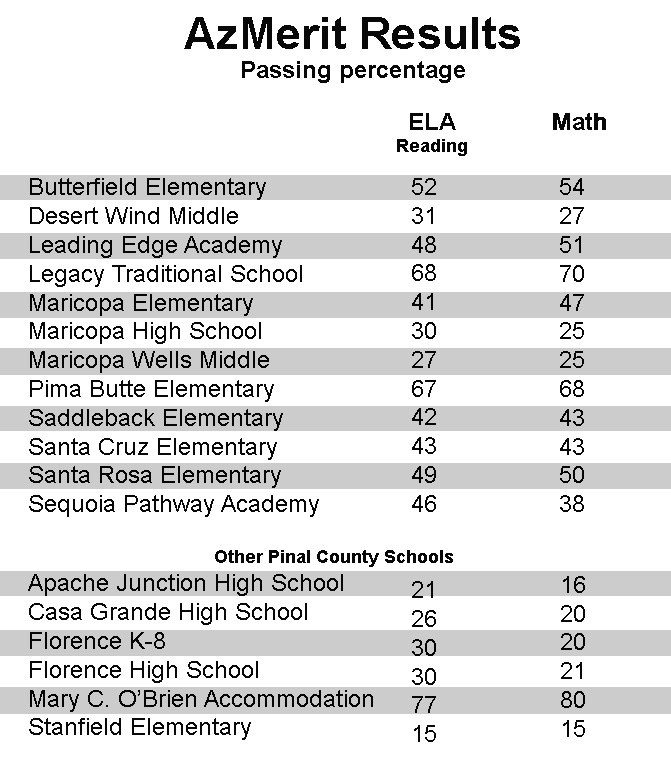