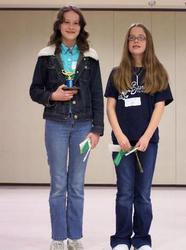 Tyler Curtis of Maricopa Elementary School walked away with the championship trophy at the MUSD District Spelling Bee Thursday morning.  Her final, winning word was ‘tamale.’

During the first round of competition, eight students were eliminated, stumbling over words like: ‘versatile,’ ‘mallard,’ ‘taupe’ and ‘camouflage.’ Round two’s words were too difficult for four additional contestants.

Curtis won in Round 3, beating out runner up Kelleigh Hogan from Saddleback Elementary, as well as alternates Janaa Manning from Santa Cruz Elementary and Delano Jackson from Desert Wind Middle School.

Each student was given one word per round. He or she could ask for a definition of the word, to have it used in a sentence, its language of origin and for any alternate pronunciations.

“A big congratulations to all the students who participated in the 2010 Maricopa Unified School District Spelling Bee. They did a fabulous job,” Stewart said.

Parents, district staff and community members are invited to attend and support Curtis and Hogan as they compete in the 47thAnnual Pinal County Spelling Bee on Feb. 19 at 9:30 a.m. in the Vista Grande High School auditorium in Casa Grande.