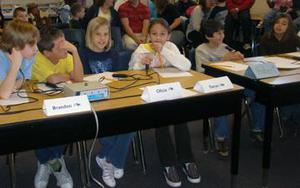 Where was Pearl Harbor? Find the product of 3 times 148 in less than 15 seconds.

It is questions like these that Maricopa Elementary teacher and league organizer Matthew Metcalf hopes to use to determine the smartest fourth and fifth graders in the Maricopa Unified School District.

This Wednesday each Maricopa elementary school will send a fourth and a fifth grade team to compete in the district’s academic league championship.

The teams will face off in a two-round tournament to determine which school has the smartest team at each grade level.

This is the third year Maricopa Unified has hosted an academic league, and Metcalf said it has been an astounding success.

“It is a great motivator for the students,” he said.

Metcalf is not only one of the league organizers, but he also crafts the questions for the tournament.

“To come up with the questions I take concepts that kids should know and take them to a higher thinking level,” he said.

In years past the tournament had featured questions like ‘Who is Barney Rubble’s wife?’ but Metcalf said those types of questions have been eliminated this year.

The tournament is open to the general public, and Metcalf said he would encourage everyone to come out.

“One of the great things about a district our size is that you can gather all the schools at one spot and get a tournament like this done in less than a day,” he said.