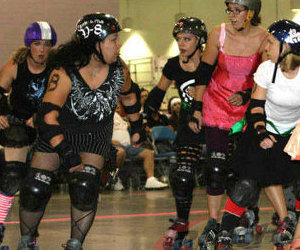 You remember roller derby on TV, don’t you? Those battling babes, and guys, who would just as soon knock you over the rail as shake your hand.

You haven’t seen it for a while, have you? Well, it’s back — maybe bigger than ever — and a Maricopa Meadows resident is right in the middle.

Meet Chachi Patron. OK, her birth certificate says Corinna Velasco, but Chachi seems to fit her better. The 42-year-old mother of three has been a part of the sport’s revival for five years, participating in the five-team AZ Roller Derby League in Phoenix.

Velasco never played competitive sports but thought she might fit in with roller derby.

“I went to one of my dad’s hockey games and there are girls that play hockey,” she said. “I can’t ice skate but I saw the roller derby online and I thought, ‘I can do that.’ I used to roller skate all the time as a kid. I started doing it to keep myself busy.”

Although currently injured (she recently had surgery for a torn meniscus), she is a member of the Surley Gurlies. Her teammates are called Destructo Kitty, Rum Bunctious and Book ’Em Betty, among others. Obviously, these women like to have fun.

How did Chachi Patron come to be?

“I had a friend I used to work with who called me Chachi,” Velasco said. “We used to fool around and talk like mobsters; ‘Eh, Chachi, how ya doin.’ I thought the name Chachi de la Muerta would be a cool name, but there was a girl in Texas that already had it. Then I thought of maybe Patron from the tequila brand. I could be ‘Chachi Patron,’ which is kind of a Spanish-sounding name. Plus, tequila kind of sneaks up on you and knocks you out. It’s funny, though, because I don’t drink.”

A native of Phoenix, she has lived in Maricopa for four years and works in Chandler at A.J.’s Fine Foods. It makes for a busy schedule between being a single mom, working, making the daily commute and finding time for practice and the games, which are called bouts.

It’s also a physical grind on the track. Although the extreme physical demands of the old game, knocking opponents over the rail and fights which seemed to break out about every two or three minutes, is gone, the sport is still tough.

“We hip-check, use our shoulders to knock somebody down,” Velasco said, “but now it’s more strategic and less fighting. It’s more helping your jammer get through to score.”

And they still use the whip, a favorite move of old-style roller derby fans.

It’s all done on flat tracks rather than the banked tracks of old. Though the banked-track sport still exists, by using a flat surface it allows the sport to use roller rinks already in place. The banked tracks are very expensive.

“It’s a game for everybody,” she said. “Even if you’re slow, if you can block and hit somebody you’re fine. There’s some little, tiny girls that are fast and they can hit, too.”

It all takes place under the auspices of the Women’s Flat Track Derby Association, which has leagues in four regions across the country. Teams compete for spots in regional championships that ultimately lead to the national championship. The Tucson league skated in the regionals recently and there are leagues in Prescott and Camp Verde.

But it’s mostly just fun for Velasco and her teammates. “Once you start playing it becomes a passion. The camaraderie is awesome.”

***ADVERTISEMENT***In a recent bout in Tucson against the Debutantes, Velasco skated on a Phoenix team called the Goth Girls. She stopped to do some shopping on her way to Tucson.

“So I wore black polish and a short skirt,” Velasco said.  “I was at Walmart and some members of my church saw me. I thought they must be horrified, thinking I was some kind of crazy chick. But when I told them I play roller derby it was like, ‘Oh, OK’ they seemed to understand.”

As for the game itself, Velasco said, “The adrenaline pumps you up. People think that when you get hit is must really hurt, but you really don’t feel it.”

The next bout is Nov. 5 and tickets can be purchased online or at the door.

For information on the AZ Roller Derby league, visit www.ArizonaDerbyGirls.com. National news, including archived video of many bouts, can be found at www.DerbyNewsNetwork.com.