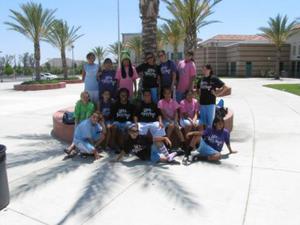 The Copa Crew girls’ basketball team is registering participants and sponsors for its second annual Back to School Tournament.

Girls teams at the JV and 13U levels are invited to compete in the event, which will take place Aug. 28-29 at Maricopa Wells Middle School. Copa Crew co-founder and coach Dee Estrada is hoping to sign up 16 teams for this year’s tournament; the inaugural event in 2009 involved 12 teams.

“We decided to host our own tournament to try to attract other teams to come to Maricopa,” Estrada said. “We are trying to let people know that we are here. The girls are just really excited, and I am excited for them. This tournament is a great accomplishment. We are hoping that every year we have it, we will draw more and more teams. We want to draw teams from all over. It is good for our community.”

Each team will be guaranteed three games in the tournament, which will run from 8 a.m. to 8 p.m. Aug. 28 and from 3 to 8 p.m. Aug. 29. Trophies will be awarded for first, second and third places. AAU rules will apply.

Sponsors can set up booths at the event at a cost of $20, which covers both days. The sponsor registration form is available on the Copa Crew team’s Web site at www.copacrew10.webs.com. The deadline to register for booths is Aug. 23.

“Sponsor banners will be on display in the gym,” Dee Estrada said. “That is our way to give back to the community, to make sure people who are visiting us will shop at local businesses.”

Estrada is encouraging fans to come to the Maricopa Wells gym and watch the Back to School Tournament games. Tickets will be available at the door at a cost of $5 per day for adults and $3 for students with an ID. Children ages 5 and younger will be admitted free.

“One of our goals this year is to involve the community,” Estrada said. “We want the community to come out because it is their team.”

Jesse and Dee Estrada founded Copa Crew in 2008. Their daughter Brianna Estrada, who is a sophomore at Maricopa High School, is one of the original team members.

“We started out with five girls on the team, and we now have 22 girls,” Dee Estrada said. “The normal cost to be on a club team can be very expensive. That is why we developed Copa Crew, to give students and teams in Maricopa the same opportunities as those players (on other AAU teams). What we do is instead of charging parents for all of the fees up front, we raise the money as a team.”

The Copa Crew players range from 8 to 16 years old. The team captains are Brianna Estrada and Paige Provost, both of whom also play varsity basketball for Maricopa High School.

The Copa Crew teams participate in tournaments throughout the year. Last month, they competed in an event in Corona, Calif.