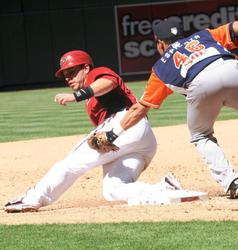 With Opening Day right around the corner, the Arizona Diamondbacks may have found their offensive stride at the perfect time.

After dropping a 6-4 game to on Monday in Spring Training, the Diamondbacks have outscored their opponents 36-14, while scoring the second most runs in the Cactus League (206), 14 less than .

However, the players are now focusing on the regular season that begins on Friday against inter-division rival Colorado Rockies.

“It will be the first Opening Day for a few of us,” said Diamondback pitcher Barry Enright, who is scheduled to pitch the fourth game of the season against the Chicago Cubs on Monday.

“We’re excited and ready to get the juices flowing, the adrenaline, and get to the games that matter,” he added.

During the game, Chris Young finished 2-for-3 with three RBIs and Justin Upton added a homerun.

To support the team, the Diamondbacks this year brought in a number of new players to help them challenge for the National League West crown.

“It’s upon us and we’re excited,” said veteran Russell Branyan, who made the team after signing a Minor League contract during the off-season. “We got a lot of questions answered, but it’s a marathon.

“We’re going to take it day-to-day. I think we got a ball club that can go out there and compete and really do something in this Western Division.”

After a 97-loss season last year, was focused on getting back on the right side of winning and new , who came over from the San Diego Padres, is helping put a strong product on the field.

The starting rotation for the Diamondbacks is looks solid, and with the addition of Putz, the bullpen will be stronger than last year’s MLB-worst.

Last season’s bullpen had a combined ERA of 5.74, which was a full run worse than the next worst bullpen.

“We are here to win games,” said Galarraga, who will fill the fifth spot in the rotation behind pitchers Ian Kennedy, Daniel Hudson, Joe Saunders and Enright. “We have a good team and we just need to be healthy and do the little things. We have a lot of young people that are hungry to win.”

Arizona, which finished 12-25 in Cactus League play, will enter Friday’s game with Colorado on a three-game winning streak, counting the final game of Spring Training in which they beat the Cubs, 15-4, and two exhibition game wins over Mexico’s Monterrey Sultanes (11-4) and the Quintana Roo Tigres (10-2) on Wednesday.

The Diamondbacks open on the road for their first six games, with three contests at Coors Field with the Rockies before heading to to face the Cubs starting Monday.

’s home opener at Chase Field will be Friday, April 8, when they host the reigning National League Central champion Cincinnati Reds at 6:40 p.m.