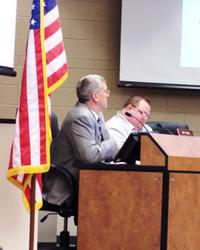 The Maricopa Unified School District’s governing board met Wednesday to take a look at both its meeting agenda and number of monthly meetings, and to review the administration’s reduction in force determination form, a document that may be used to identify teachers laid off due to budget cuts.

Director of Assessment and Accountability Lynnette Michalski presented some proposed changes to the present agenda, including the addition of a summary report by the superintendent, governing board activity reports and moving approval of the minutes to the consent agenda.

“My goal was to streamline the process,” said Michalski.

Board president Scott Bartle stated his intent for the agenda was to pare it down to state-mandated requirements. “The intent is to give us more flexibility.”

“If we strip down too much, we run the risk of not providing information to the public,” said board member Carrie Vargas.

“I don’t want transparency to go away,” added board member Geoff Goddard.

The board, in a 4-1 vote, ultimately moved to change the policy to read “the order of business may be as follows” instead of the previous “shall be as follows.”

In terms of reducing board meetings to one per month, Vargas was “vehemently opposed” to that, saying that to do so “is a disservice to the community.”

Vice-president Torri Anderson earlier suggested taking work sessions out of regular meetings and holding them separately or before a meeting. Policy was left at two meetings per month with the superintendent and the board president to determine the type of meeting(s) needed.

Superintendent Jeff Kleck presented Exhibit GCQA-E, a form for determining reduction in force of professional staff. The document, which does not require board approval, will be used to rank teachers in terms of planning and preparation, classroom environment, instruction, professional responsibilities, teacher certification, teaching experience and degree(s) held.

“We probably will experience some reductions in force,” said Kleck. “This is the administration’s way of carrying out policy.” According to Kleck, reduction in force should be known by March 1 with teacher documentation available by mid-March.

“I think the timing is bad,” said Goddard, indicating he would like to see the form used earlier as a basis for teacher observations.

“I don’t think this is a surprise to anybody; it’s not different than what they saw at the beginning of the year,” Kleck said. “Interviews, evaluations and the RIF policy all have a one to one correlation.”

During the call to the public, teacher Jessica Ansley said she believed “it (the exhibit document) is a good tool to use.”

Questioning that it accounts for only one lesson taught, Ansley explained she doesn’t base a student’s grade on one test. “But that’s what this would do.”

If several RIF candidates have the same point totals, Kleck indicated that national information tells what abilities teachers in the top 75th percentile have that the lower 25 percent do not possess.

Kleck stressed that teaching ability is a critical component in determining reduction in force. “Administration is trusted by the state of Arizona to make that determination. Trying to decide who stays and who goes—I don’t think anyone would want to do that,” he said.

Next year’s form will change after the state decides on new evaluation content, including a future performance piece to indicate how students are improving.

The board expects to approve notices of non-renewal of contract on April 13, offering teacher contracts for the 2011-2012 school year on May 11.

“We will do our best to be as fair as we possibly can and make sure that we have the information we need to have the best teachers in the district,” Kleck said.