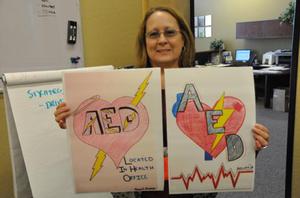 They save lives by restoring a heart to a normal beating patter, but what good are they if they can’t be found?

An Arizona law passed in 2008 required that all public buildings have a minimum of one automated external defibrillator (AED) on site at all times.

To comply with this law, the Maricopa Unified School District purchased eight of the units and placed one in each nursing office of its schools.

“The great thing about the models we got is that they are very easy to use,” said Marilyn Wyant, director of nursing services for the district.

According to Wyant, the device has lighted squares on the side of the machine to tell the user each step of using the AED.

She said it is not like the paddles that you see in the movies or TV. The person using the device first places the machine’s paddles on a victim’s chest and it detects if a shock is needed or not. If so the machine then tells the users to warm up the paddles and it gives the required amount of a shock.

In an emergency, a teacher may not know where the machine is located. To remedy the situation, the district is implementing a series of signs through the schools telling of the AEDs’ locations.

At first, the nursing office was going to purchase roughly 48 signs for about $600, but Amy Kohl, a district employee, came up with a better idea.

“She said we should have a contest with students designing the signs, and then the two winners could be used throughout the schools,” Wyant said.

So the nursing director got in contact with the high school athletic trainer, Lisa Gandolfi, who said her class would love to design some signs. From the 62 submissions that were received, the two winners were sophomores Rosa Garcia and Katie Wilson.

The winners each received a pair of movie tickets, a $10 gift certificate to McDonald’s and a certificate of accomplishment.

By designing the signs themselves, the district will save nearly $500.