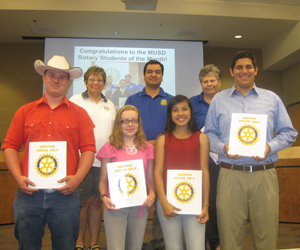 Four students – two high school seniors and two eighth-graders – were recognized this week at a school board meeting as Maricopa Rotary Club’s students of the month.

They were recognized for the month of March.

Allen Allcott, Jr., a senior at Maricopa High School who also is enrolled in the Central Arizona Valley Institute of Technology, has a career goal of becoming a certified firefighter and working in Colorado, according to a press release.

CAVIT is a joint technological education district in which Maricopa High School is a member.

Allen is enrolled in the CAVIT Fire Science II and EMT program, the release states. He’s also in the Maricopa High School welding program and is part of the high school’s JROTC program.

In addition, Allen is a community volunteer firefighter with Thunderbird Fire District.

“He has drive and vision to realize his career plans after CAVIT and MHS,” the release states.

Christian Palafox Salazar, also a senior at Maricopa High School, was the 2013 MVP of the varsity football team and plans to play at Arizona Christian University in the fall.

Christian’s activities at the high school include the position of vice president of public relations for DECA, a member of the Keep the Peace Club, a volunteer with Melonhead Foundation and president of the Rotary Interact Club, the release states. He’s also an Eagle Scout and has served as offensive line coach and tutor at Desert Wind Middle School.

***ADVERTISEMENT*** Christian recently received the Dean’s Scholar Award. The release states he has taken many advanced placement classes and received a score of 5 – the highest – in the Spanish assessment test.

“The administration reports that he is an exceptional student leader at Maricopa High School,” the release states.

Dianna Mollinedo, an eighth-grader at Maricopa Wells Middle School, has a 3.78 GPA and is enrolled in an honors algebra class, according to the release. She is a MWMS National Junior Society President and member of the student council. She plays on the school’s soccer team and volunteers within the community.

The release states Dianna will be participating in Saturday’s Relay for Life as a member of the Panther Pride Team.

“(Principal Rick) Abel reports that she is a quiet student leader at Maricopa Wells Middle School,” the release states.

Sara Brock, an eighth-grader at Desert Wind Middle School, takes honors classes in English and math, plays music and is a member of the cross country team. School officials describe Brock as “diligent, hardworking and loved by friends, classmates and teachers.”

“(Sara) is reported to be a quiet and well-behaved student and always striving to do well on assignments, being in honors English and math, and working hard to be a good friend and student,” according to the release.