Johnathon Guillory, 32, of Maricopa was the man shot and killed in an altercation with Maricopa police officers on Sunday, according to the Department of Public Safety.

The first officers on the scene found Guillory on foot in a common area within Cobblestone.

What happened at that point and what words were exchanged has not been clarified by officials, though Graves indicated an MPD sergeant and an officer were involved. 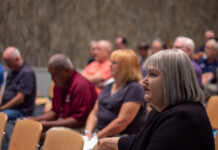