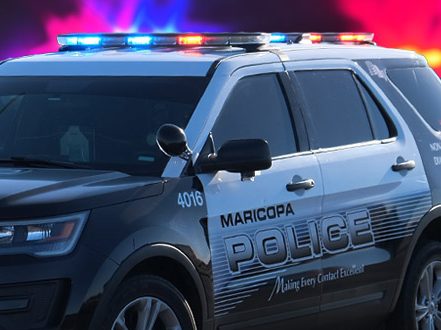 A Maricopa man is facing domestic violence charges after his arrest July 16.

Adam Mulhollen, 31, was involved in an altercation with his girlfriend July 2 in their home on North Ventana Lane in Glennwilde, police said.

The woman told police Mulhollen was intoxicated and trying to leave in a vehicle with his son. She claimed he began pushing her and became increasingly aggressive. The woman said she began hitting him in an attempt to make Mulhollen stop, but it did not help.

Mulhollen allegedly placed the woman in a choke hold. The woman tried to bite Mulhollen to escape his grasp but lost consciousness, she told police.

Officers observed a bump on the woman’s forehead, swelling to her face, petechiae (tiny spots that are a sign of blood leaking from capillaries under the skin) as well as complaints of neck pain and difficulty swallowing and speaking. Numerous contusions and lacerations were also observed, police said.

Mulhollen, who fled the residence before police arrived, obtained an attorney who facilitated an interview with the Maricopa Police Department July 16. Mulhollen allegedly admitted to placing his girlfriend into a choke hold to prevent her from hitting him and biting him.

Police observed bruising and bite marks on Mulhollen’s arm. He claimed the woman also grabbed a butcher knife and broke the window of his dad’s vehicle, police said.

Mulhollen was placed under arrest and booked into Pinal County Jail.