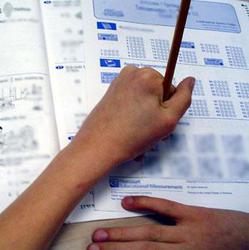 The first results for the 2007-2008 AIMS High School test shows Maricopa High School’s tenth grade students are either barely reaching or below the state average in the percentage of students meeting or exceeding Arizona’s standards.

AIMS, the Arizona’s Instrument to Measure Standards, is a state-mandated test for all high school students and among the criterion used to determine graduation eligibility.

On two of the three categories, reading and math, MHS had 64 percent and 57 percent of their students meet or exceed the state standards respectively. The state average for these two subjects are 74 percent and 69 percent respectively.

MHS students are at the state average for writing with 74 percent meeting or exceeding the state standard.

Despite the seemingly low numbers, the school has drastically increased its scores in writing and math in the past three years. Maricopa had 13 percent of its tenth grade students pass the math portion of AIMS in 2004. In the same year, 51 percent passed the writing portion and 36 percent passed the reading section.

Superintendant John Flores said he is satisfied with the progress the school has made in recent years.

“If you look at where we were and where we are now, you can see we have improved in a lot of areas,” Flores said.

He also said that MHS is continuously looking at the scores and trying to develop programs to help increase the percentage of students who pass.

MHS Principal Jeff Kleck also said he looks at the results as sustained improvement and believes the numbers will continue to increase. Kleck added the MHS administration set a modest goal of a 3 percent increase in the number of students meeting or exceeding the standards every year.

So far this year, the only subject the tenth-grade students have increased in is writing at a rate of four percent when compared to 2006 results. Math performance has stayed the same and reading dropped four percent from last school year.

The next round of testing begins Tuesday with writing followed by reading on Wednesday. Math testing will take place April 8 followed by science on April 9. Science is the newest content area to be included in AIMS testing.

District representatives said they encourage students to prepare themselves mentally and physically for the tests by getting plenty of rest, eating a good breakfast and staying focused during the test. Also in the list of tips is advice for parents including making the morning of test taking pleasant for students, getting the students to school on time and reminding them of the importance of the test.

If parents feel their students need help with the test, Kleck encourages the students to use their teachers as resources because the school no longer has a tutoring program funded by the state.

“Any one of the teachers here would not hesitate to help a student if they asked,” Kleck said.

For more information about AIMS visit the Arizona Department of Education’s AIMS Information Center or call the AIMS Hotline 1-866-688-AIMS.