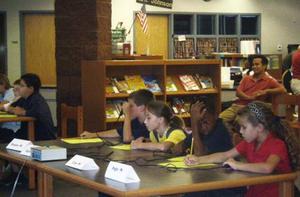 Students from all four Maricopa elementary schools used their skill and knowledge Tuesday in the second round of this fall’s Academic Bowl competition.

Students are allowed to have pen and paper in front of them, which they used frequently during the competition. The teams have 15 seconds to answer the question, and, if one team provides an incorrect answer, the other team gets the chance to answer.

The students are tested on a variety of academic categories such as science, math, spelling and history.

An example of the questions in the fourth grade competition was, “Where is the famous opera house located that looks like a ship’s billowing sails?” Pima Butte came up with the correct answer of Sydney (Australia).

The students were also tested on their pop culture knowledge. In the fifth grade competition one question asked for the popular 1960s dance that also refers to a fun, family game. The twist (and the game of twister) was the correct answer.

The final round robin competition will be Dec. 4 at both Maricopa Elementary School and Pima Butte Elementary. On Saturday, Jan.19, the final championship tournament will be held.