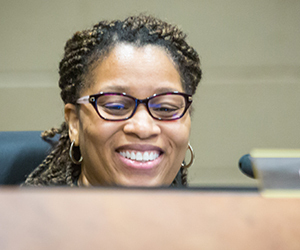 The Maricopa Unified School District Governing Board welcomed Rhonda Melvin as its newest member Wednesday night. And then the board looked at filling teaching vacancies.

Melvin, a homemaker with an associate’s degree in early childhood development, was selected by Pinal County Superintendent Jill Broussard to fill the vacant board position left after Leslie Carlyle-Burnett’s resignation. Melvin was “grateful and honored” to be awarded the position.

The ceremony was brief, but dignitaries from across Maricopa came to be a part of the swearing in process. Maricopa Mayor Christian Price, Vice Mayor Marvin Brown and City Manager Gregory Rose were in attendance as Judge Lyle Riggs led Melvin through her oath and responsibilities to the district.

When the ceremony concluded, Melvin joined the rest of the MUSD Governing Board to conduct their regularly scheduled meeting.

The meeting moved quickly through the limited number of items on the agenda. The only issue that raised any questions was the 16 vacant teaching positions. However, the district has been increasing their recruitment in state, out of state and internationally since December to combat the issue.

“We’re looking at three different initiatives right now,” MUSD Director of Human Resources Tom Beckett said. “We just initiated the finder’s fee (which provides a bonus to teachers who bring other educators into the district), and we picked up a staff member from that. We are also using two other agencies. One contracted service works directly with special education placements, and they’re looking for candidates to fill those life skills roles for us. We’re also looking at an international firm that actually brings in foreign nationals from other countries.”

This is also an issue that most districts around Arizona are dealing with. Budget cuts to education are causing many teachers to look elsewhere for work.

“We are fortunate,” Beckett said. “We are cautiously optimistic that we are going to be able to start the year fully staffed, and I know our principals have been working hard to make that happen.”

The board also heard a presentation from MUSD superintendent Steve Chestnut regarding the proposed budget for the upcoming year. In the current budget, classroom expenses are currently dwarfed to outside expenses. According to Chestnut, this can’t be adjusted until the district gets more funding or has an override in place.

“I want to thank you, Dr. Chestnut, and your team for all the work you put into the budget,” MUSD Governing Board member AnnaMarie Knorr said. “I realize how difficult it is to increase classroom spending when we’re not getting an increase in funds, but you guys worked hard and found some areas where you can cut and invest into the classroom and into our teacher’s salaries.”