A fire today added to a spate of blazes reported on the exterior of homes in the past couple of weeks.

At noon, Maricopa Fire Department was dispatched to the 43000 block of Magnolia Road, where the patio was burning. When crews arrived, they found residents and neighbors in the backyard fighting the fire with garden hoses.

MFD crews extinguished the fire quickly and made sure all occupants had been able to get out of the house.

The cause of the fire is under investigation. No injuries were reported.

Last week, MFD dealt with another patio fire, which residents tried to fight on their own. In that case, residents were treated for smoke inhalation.

Most of the damage was to the exterior. 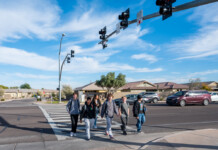