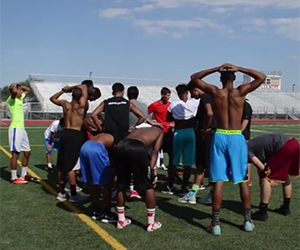 The players brave the scorching heat each morning throughout the summer to train and condition. They cycle through weight training, agility drills and sprints. Each repetition of weight training and each finished sprint workout brings the team one step closer to kicking off their season.

“So far this summer the kids have been working really hard,” McDonald said. “We’ve got about 90 kids who are coming in consistently and putting in the work. They first start off with about an hour working on their core. They also have an hour of field time where we work on their speed, their fast-twitch (reflexes) and their agility.”

The team has been participating in seven-on-seven passing games throughout the summer as well. Each Tuesday night, the freshman players travel to Campo Verde High School to play other freshman programs around the Valley of the Sun. The junior varsity team follows suit each Thursday night. The varsity team on the other hand tends to enter tournaments. Of the 13 passing games the varsity team has played so far, they have won an impressive 11 times.

“In terms of seven-on-seven, we’ve been participating in numerous events and doing really well,” McDonald said. “We’ve beaten some really good perennial schools that are always at the forefront of high school football. It’s like day and night from last summer in terms of strength and their development and their confidence.”

McDonald has also been impressed with the freshman players. In their passing games at Campo Verde, the freshman team has seen tremendous success.

“They’re a very impressive group of kids coming in,” McDonald said. “I’m really excited to get to coach those guys over the next four years.”

From what McDonald has seen from his team so far, he believes his team can compete with anyone. The team is expected to return 11 seniors, but the exodus of 16 seniors from the 2014 season will leave some large gaps in key areas of the starting lineups.

The team’s leading passer and rusher from last year, senior Aaron Owens, will return, but his leading receiver Elisha Donaldson has graduated. Much of the receiving responsibilities will likely fall to senior receiver Jack Johnson Jr. He lacks the size Donaldson had, but his speed and agility still make him a threat to any defense.

***ADVERTISEMENT***The largest holes will be on defense. The team lost their top four tacklers from last season to graduation. The coaching staff will rely on the new talent rising to fill these gaps and contend in the Arizona Interscholastic Association Division II conference.

“It’s been a good summer,” McDonald said. “It’s going to lead into a year that I think will be a good year. I really do. I feel really good about this group.”