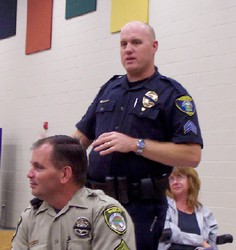 Gangs are in communities, and schools are part of those communities. However, dealing with gang activity is a two-sided coin. On one hand, no community wants to believe or admit that gangs are “our” problem. Denial only makes the problem worse.

Maricopa has gathered a task force of community leaders, law enforcement personnel and school officials to address the problem; Maricopa is not in denial. In fact, according to Ogaard, more self-proclaimed gang members were identified on April 13 at the middle school after the weapon incident (see related story) than ever before.

The other side of the coin is that overstating the problem gives gang activity prominence and gang members more credit than they deserve.

Sgt. Dan Brown, Maricopa Police Department, indicated that gang members and two-strike criminals from California have been coming to Arizona to evade the “third strike.” Within the past two weeks legislation has changed so that infractions in Arizona will count as that third strike. “That is why we now have access to southern California’s law enforcement database,” Brown noted.

Both Ogaard and Maricopa Wells Principal Stephanie Sharp indicated that drugs, alcohol, weapons and bullying would not be allowed on the middle school campus. “We have a zero tolerance policy; students are not allowed to intimidate or bully staff or other students,” explained Sharp.

Ogaard noted that he is on campus “to protect constitutional rights.” If, however, there is reasonable suspicion on the part of administration, they have a right to reasonable and non-intrusive search of students and their property. Random searches “help prevent problems,” noted Ogaard.

Sharp explained that students who have had problems at school are on a “watch list.” This is not accusatory, but a means of monitoring those students for possible prevention programs and mentoring. “Our main concern is the well-being of every child here,” Sharp added.

“If something is going on, students need to let someone know; they need to be our eyes and ears, and we will honor their anonymity,” she added. Anonymous notes in a suggestion box or left for a teacher or administrator may stop a problem before it escalates.

“We also want to be good neighbors to our community,” said Sharp. Students have been gathering in parks near the middle school or cutting across yards, causing concern for the nearby homeowners’ associations. Graffiti has also been a problem. “If you provide the paint, I’ll provide the labor,” Sharp told the group.

Sharp explained that graffiti on campus will result in restitution and disciplinary action.

“We get it down as fast as we can. The less time it’s up, the more we show it will not be tolerated.”

Ogaard added, “It’s a difficult crime to prevent. What takes two minutes to do takes two days to take care of.” The schools and law enforcement keep samples of graffiti to be “able to help with identification.”

If tagging is related to gangs, it can be documented. The main thing, according to Ogaard, is to “do something,” to be reactive, and also to be proactive in order to prevent gang activity.

What about the “good” kids–some of the 1,056 students enrolled in the middle school, including 40 new students last week–who are never in trouble and always working hard at school?

Sharp proposes “Fun Fridays,” outdoor lunch activities, intramurals and assemblies to recognize and reward those students who are doing their very best at school.