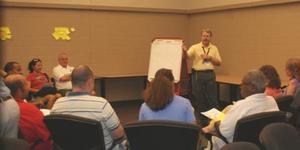 First steps are always the most important. Saturday morning at the MUSD district office building, the district opened its doors to approximately 60 staff and parents who wanted to help take the first steps to rebuild the district’s image, to retain its student population and to figure out what is needed to bring back students who have left for charter schools or other districts.

In large part due to negative misperceptions that MUSD is a failing school district, and with recent budget cuts contributing to that, the district realizes it has to do something to ease parents’ fears about the future, while underscoring the district’s current success and achievement.

“Either we sit down and do nothing, or we go forward—and this is where we start,” said Superintendent Jeff Kleck.

Kleck began the informal and open dialogue as he talked about a conversation he had with his neighbor who was unaware of Kleck’s position. “He told me he heard the high school had a bunch of dropouts. ‘I said really? Where did you hear that from?’”

Kleck went on to humorously, yet poignantly, explain how “word of mouth” and “miscommunication of the truth” is hurting the district. With students leaving for other districts or to charter schools, the district loses more funding which, in part, has resulted in cuts to programs and layoffs.

“The truth is—we could hit an 80 percent graduation rate. The national and state average is at 70. Yet no one talks about that,” Kleck said. “Communication is important and requires two things—one a sender and one a listener. We have to do both.  But today is all about listening.”

It was also about brainstorming. MUSD Human Resources Director Tom Beckett laid out the ground rules: “not to trash charter schools, or to berate the Kyrene and Tempe schools that are taking students from Maricopa.” He also made it clear the discussions were not to be a blame game directed at legislators or community members.

Beckett put forth the district’s objectives in positively communicating a strong educational choice for families, how to dispel bad information and how to validate the good work being done. Statistical information presented showed district students performing at the same levels as their peers, and in writing they are excelling.

Attendees were split up into three groups, elementary, middle school and high school, to honestly discuss parents’ complaints, failures to communicate achievements and ways to improve that communication.

Also discussed were better ways to bring the parents into the overall conversation and how to bring the schools together, so that their “united and committed spirit to achieve” is woven within the culture of the city.

The ideas were written down by members of the Student Recruitment and Retention Committee that will be regularly meeting to discuss all the proposals that ranged from chili cook-offs to parades and participation in town events to an initiative for a “kindness program.”

Maricopa Elementary Principal Rachele Reese proposed the kindness program. “Something like this would have the kids become actively involved in their community, and, in return, the community, in each neighborhood, would realize how important it is to be involved with what the children of our schools are doing,” she explained.

Joe Veres, Desert Wind Middle School principal and a committee member, commented on the town hall. “I thought today’s support was outstanding, a lot of good dialogue. I think MUSD is going to show how tenacious it will be in fighting those misperceptions. Right now, the negative is overtaking the positive. There’s a lot of hard work going on, and they’re still going to be committed to being the best district in the state.”

Former school board member, Tracy Davis, attended as “just a concerned parent.”  She said, “We’ve come out on the short end of the economy. We’ve been hit hard, and our overrides have not passed. However, as a community, we still need to rally behind our kids and schools, find ways to give them the support they need. It doesn’t help to tear each other down, and, more than ever, what we need to do, as parents, is to get involved, volunteer, because as community we’re in this together.”

Beckett also thought the meeting was a success, “a good first step,” and talked about the next one. “If everyone brings just one person with them, it will have that ripple effect. That’s how it all begins.”