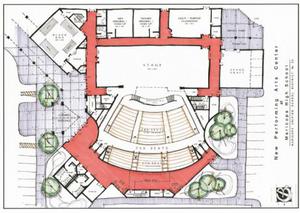 The Maricopa Unified School District’s governing board got a sneak peak at the plans for the district’s new performing arts building at Wednesday night’s meeting.

The presentation of the facility was the culmination of nearly four months of work by the performing arts committee.

These members meet with the architect of the structure, Don Brubaker, the past several months to compile a wish list for the facility and then narrow it down to a more realistic goal.

“I think the first wish on the list was a never-ending pile of money,” Brubaker said.

Brubaker said that the team went through several possible designs for the structure before they arrived at the one presented to the board.

Some of the features of the finalized design include seating for 750, an area to construct props, a classroom, men’s and women’s dressing rooms, a lobby, restrooms and an excess of storage space.

“When we were meeting with the committee, the one thing that keep coming up was a need for storage space,” Brubaker said.

One of the more interesting features of the performing arts building is a room referred to as the Black Box. It is a 40-by-40-foot room that can be adjusted in size to hold rehearsals and other activities.

Another advantage of the structure is the fluidity. “People will be able to freely move from not only one room to another, but performers and students will be able to enter the building from the rear, eliminating any distraction,” Brubaker said.

Despite the plans being completed, it may be some time before ground is broken on the new facility.

“This is a matter of turning over the dominoes,” said Burnie Hibbard, assistant to the superintendent.

Another hurdle may be the district’s assessed valuation. The total amount a school district can take out in bonds is determined by that district’s valuation and MUSD is close to the limit.

“Our valuation should be coming out within the next few months, then we will have a better idea where we stand,” Hibbard said.

Regardless of the forthcoming valuation of the district’s assets, Hibbard said the project won’t realistically break ground for 12 to 14 months minimum.

“By the time we are ready to break, we should have another assessed value released, so we should be fine,” Hibbard said.