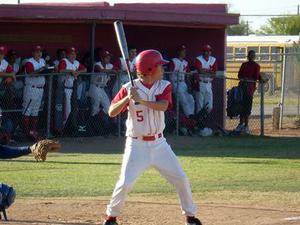 The Maricopa High baseball team was unable to mount a comeback in the bottom of the seventh inning, losing to Baboquivari 6-4 Tuesday.

It wasn’t only in the seventh inning where Maricopa struggled offensively; the Rams struck out 10 times in the game.

Despite the lack of offense, Maricopa entered the seventh inning leading Baboquivari 3-4. But the Warriors lead off with back-to-back singles to put two runners on with no outs. After an out on a pop-fly, the next batter hit a hard grounder that took a bad hop over the shortstop’s head, allowing one run to score. The next batter hit a single up the middle bringing in two more runs and giving Baboquivari a 6-4 lead.

The Rams attempted a comeback in the bottom half of the inning. Nick Preciado lead off with a single, then after a strikeout Boston Friel hit a double which put two runners on with only one out. But the next two batters were unable to keep the rally going, both flied out to end the inning and the game.

The loss is the third of league play for the Rams and could result in another drop in league standings once all games are posted for the week. According to www.maxpreps.com, San Pasqual Valley also has three league losses, but one game has not been reported and they still have two games to play.

Maricopa has one game left in league play, against San Pasqual Valley. In their last meeting, Maricopa won 17-2, however recent games indicate that history does not repeat itself for the Rams. They beat both Yuma Catholic and Baboquivari in their first meetings and then lost the second time playing each team.

Since Friday is the last home game of the season, a ceremony to honor the graduating seniors will follow the game.