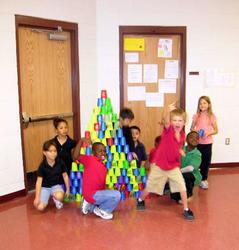 Then she looked into the World Sport Stacking Association’s goal of the most people sport stacking at multiple locations in one day, and she signed up Santa Cruz Elementary.

“I thought it would be a fun opportunity for students,” said Dyll, who went on to say that speed stacking is physical activity. “Any activity that gets students up and out of their desks is still physical activity.”

The students were definitely active. In the morning third, fourth and fifth graders spent 30 minutes rotating between six cup stacking stations. The Battle Stack station pitted teams against each other to stack the cups quickly. The team finishing first hit hand pads to knock down the opposing team’s stacked cups. There were also timer and mini-cup stacking stations, as well as a pyramid, music pattern and creative stations.

Kindergarten, first and second graders had five stations that included a three stack, a six stack, a pyramid, a musical cup pattern and ‘be creative’ stations.

Music teacher Mary Goldner paired up with Dyll to run the event, integrating music into one of the stations where students used a musical pattern to rotate the cups. The older grades were given a more challenging music pattern to work with.

By the end of the school day Dyll anticipated that 250 stackers contributed to the world record attempt. When they completed their challenge, students received a sticker that read ‘Guiness World Records: I stacked it up.’ Students had a great time going from station to station, dancing and cheering when they created a tall stack of cups or won a relay.

The World Sport Stacking Association’s ‘Stack Up’ event includes stackers from 1,468 schools, organizations, and families, representing 192,595 stackers from 25 countries. Last year’s event garnered 143,530 stackers worldwide. The sign ups for this year’s event were expected to break the record for participation.

Participating groups submit their paperwork to Guiness after they run their events. For more information on the record breaking event, see the WSSA website.