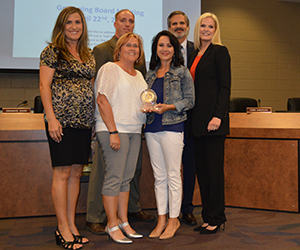 The Maricopa Unified School District Governing Board unanimously approved a new “stepless” salary schedule for all certified staff for the 2015-16 school year.

The salary schedule has been a point of contention for the board and members of the MUSD staff for some time. MUSD Superintendent Steve Chestnut has been working with the teachers in the district to come up with a schedule that appeals to new hires and current staff alike. After reaching what the board viewed as a fair compromise for both, they voted to approve the new schedule so it can be set in place by the deadline for teachers to sign new contracts at the end of April.

“I know there is compromise on both sides, but it was necessary to move forward,” MUSD Governing Board president Patti Coutre said. “Nothing is ideal and compromise has to be made, but I think the administration has done a really good job to make sure our teachers feel valued.”

The current salary schedule was determined to be unsustainable by the board. The district has been unable to provide the full amount for the salary schedule for five of the last six years. The new salary schedule will be “stepless.” Instead of certified staff receiving a 2 percent raise each year (if the money is in the budget), the governing board will make annual decisions on teacher compensation.

After receiving feedback from MUSD staff, Chestnut and Human Resources Director Tom Beckett continually adjusted the new schedule until they reached one that seemed fair to both new hires and current staff. The main concern of the current staff has been the high value put on new hires. In order to be fair and make the current staff feel just as valuable, the new schedule ensures that no current teacher with the same qualifications as a new hire will receive less money.

If a current teacher has a lower salary than a new hire, their salary would be raised to match that level.

“I want to thank the teachers who spoke up and asked questions,” Anderson said. “I want to thank staff for being involved in this process and the administration for working on it. I’m sad that we’re pushed into this situation by our state Legislature, but when we’re pushed we need to get involved.”

The board also approved a new administration compensation plan for the 2015-16 school year. Administrators will keep the same minimum and maximum salary limits, but lose the automatic experience increase after each year. The new administration plan is cost-neutral to the district.

“I’d like to really take a look at this next year to see what we can do to be more competitive,” Coutre said.

The board took a moment in the middle the meeting to honor former board member Leslie Carlyle-Burnett, who stepped down from her position at the beginning of the month. Members of the board were visibly emotional as they presented Carlyle-Burnett with a plaque to thank her for her hard work and dedication over the years.

“I really need to give this position to someone who can really devote the time,” Carlyle-Burnett said while fighting back tears. “You all deserve absolutely the utmost attention and service. I grew up in Maricopa, K–12, and graduated. You all came from somewhere and you’ve made this town and this district amazing. I appreciate all of you.”

The board also honored the Rotary Students of the Month, moved the June 10 meeting to June 9, and approved the hiring of a new elementary teacher to work with gifted students.