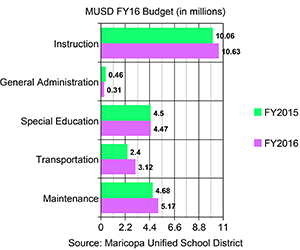 The Maricopa Unified School District Governing Board approved the first reading of the proposed budget for the 2016 fiscal year during its meeting Wednesday night.

The proposed budget does not set the numbers in stone. That will not take place until the adopted budget is approved in July. However, it is the first step in setting the budget for the 2016 fiscal year.

According to MUSD Business Services Director Aron Rausch, the school will likely have to dip into reserves to balance the budget. The main issue is a decrease in the District Additional Assistance (DAA) fund. This money is used to fund capital items such as new carpet, roof repairs or buses.

“The DAA fund has seen a $900,000 decrease,” Rausch said. “That would’ve been what we were transferring over to [balance the budget]. We’ll see where we end up and will likely have to use some reserves.”

Rausch estimated the budget for the DAA would be near $3 million if the fund had not been reduced due to state budget cuts over the last seven years.

The board also passed a resolution stating the Maricopa Unified School District strongly supports the city’s request for the TIGER VII discretionary grant to construct the overpass on John Wayne Parkway. Having the school endorse the grant application shows the district considers the overpass to be a high priority for the safety of their students.

“We are shovel ready, but what we need is construction money,” Maricopa Intergovernmental Affairs Director Paul Jepson said. “If we can land the $15 million TIGER grant, it will accelerate the construction by two to three years. So this resolution is in support of the application for TIGER funding by the state. It shows a partnership, and they rate these on partnerships.”

Maricopa City Council member Henry Wade added, “We need to protect our children. That’s why this is important.”

It is estimated that the school’s buses cross the tracks 230 times each day. These buses carry a total of 3,000 students back and forth. By creating an overpass to circumvent the train tracks, those children will no longer be put at risk.

In what was a very brief meeting, the Governing Board also approved the purchase of new laptops for students use, the new personnel schedule, and congratulated Rhonda Melvin on being named to the board. Melvin is expected to be sworn in during the next meeting on June 9.

Reclassified: Shorey is becoming a substitute. Charles Milsch is moving from substitute to MHS CTE teacher. Zoe Redfern moves from an elementary teacher to a gifted teacher. Karen Gadzinski and Dennis Koch move from elementary teaching to academic coaching. Five people are being shifted around in Food Service.