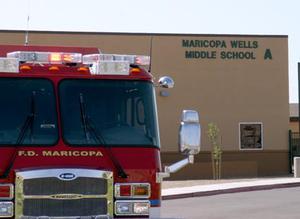 Fire trucks as well as sheriff’s vehicles lined the outside of Maricopa Wells Middle School this morning after a weapon was reportedly found at the school.

Fire officials say their trucks were at the school for an unrelated incident.

School officials say they have possession of the weapon that was brought to the school by a student.

Officials indicated that the student has been taken into custody by police.

The type of weapon has not been disclosed.

“This looks more dramatic than it is,” said school principal Stephanie Sharp.

The district office is expected to release a formal statement shortly.