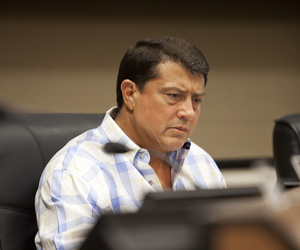 Vice Mayor Edward Farrell apologized before community members during a city council meeting Tuesday for a Facebook post in which he praised Fred Phelps, a recently deceased pastor of a Kansas-based church known for picketing military funerals and expressing anti-gay sentiment.

In his March 24 post, Farrell linked to an article about Phelps from The Onion, a satirical news organization. The vice mayor said he did not know who Phelps was or that the article was written by a satirical publication.

“It was an honest, stupid ignorant mistake and I deserve all of the criticism and all of the insults that are thrown at me,” Farrell said. “I am ashamed and embarrassed. I should have known better.”

The Onion’s article ran with the headline “Fred Phelps, Man Who Forever Stopped March Of Gay Rights, Dead At 84.” The article states that Phelps is “widely credited with forever ending the gay rights movement in America.”

Phelps, who died March 19, was the pastor of the Westboro Baptist Church in Topeka, Kan. The church has gained national attention for its picketing of military funerals. The U.S. Supreme Court ruled in 2011 that such protests are protected under the First Amendment.

Demonstrators have carried signs with the phrases “Thank God for Dead Soldiers” and “God hates fags.” The church’s website address is godhatesfags.com.

Farrell’s Facebook posting, which has since been deleted, was reported in The Maricopa Monitor, a local bi-weekly newspaper and online publication. The Monitor’s story was later picked up by The Huffington Post and other websites.

The Monitor reported that Farrell originally wrote on his Facebook page: “We need more Fred Phelps in this world. May you rest in peace sir.”

He then later wrote in a comment: “This world needs to get back to the biblical standards that our God made for us. This guy was not afraid to preach it, and I respect that.”

Farrell explained Tuesday evening that his reason for writing the post stemmed from a recent incident during a visit to Washington, D.C., in which his “privacy was violated.” Farrell was in the nation’s capital on city business.

The Monitor reported that in a later comment on his post, Farrell stated that a hotel employee took pictures of him in a health club shower.

“What in the heck makes these people think that they are so entitled?” Farrell wrote. “Yes, he was fired immediately! I don’t get it? It’s sick!”

“It was with anger in my heart that I posted the link praising him for his movement,” Farrell said at Tuesday’s meeting.

The vice mayor said he believes in America and he respects and honors the armed forces.

“Our military men and women sacrifice their lives and their families to protect our freedom,” he said. “Freedom isn’t free. And they protect our lives at the price of themselves. And that I will forever be grateful. American soldiers are the true heroes of our country.”

Farrell went on to say that he believes in equality.

Farrell did not address his views concerning homosexuality.

“To all of you who have reached out to me with your doubts, anger, threats and concerns, I have made a concerted attempt to reply to every single one of you personally,” he said. “And once again, I want to offer my apology. It was not intended to offend anyone.”