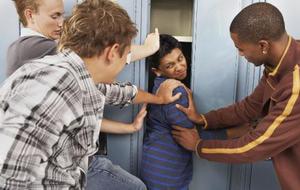 If your child is being bullied, he or she’s not alone. About 160,000 children in the United States miss school every day due to fear of attack or intimidation by other students, according to the National Education Association.

Bullying is a serious problem that is growing worse, and is taking on new forms through the use of the Internet and mobile phones, say educators. Some estimates say that 25 percent of American children experience direct or indirect bullying daily.

Broadly speaking, bullying can involve any number of behaviors, according to Findlaw.com, a leading online source of legal information, including sexual harassment of another student, teasing, excluding a student, calling a student names, physically pushing or attacking, threatening or hazing, spreading rumors, damaging or stealing belongings, or demanding money.

Cyber-bullying, a relatively new form of bullying, takes place over the Internet through social media websites and forums, or through mobile devices. Many pre-teens and teens prefer to communicate with one another through texting on their mobile devices. Because kids can share messages quickly with a large group of students, cyber-bullying can be especially effective in spreading rumors about a student or harassing a student through the sharing of photos. Because this is a relatively new area of harassment, many school districts are still trying to determine the reach of their authority in off-campus cyber-bullying attacks.

Bullying can have far-reaching consequences for the victim, the perpetrators and other students, who indirectly become distracted from their studies out of fear of becoming a bully’s next victim. Bullying has been cited as a factor in teen suicides as well as in a number of on-campus shooting massacres, including the infamous and tragic Columbine High School incident. In that case, media reports suggested that both of the shooters were victims of bullying.

Historically, bullying among school children has not been a topic of broad public concern. In fact, some adults may view bullying as a rite of passage for children and youth, as popularized on the big screen and on TV programs. Because of events like Columbine, attention to bullying among children has increased dramatically among school personnel, members of the general public and policymakers. Today, according to Findlaw, 43 states have some form of anti-bullying laws in place, complementing anti-bullying policies established at the local level by private and public school boards.

Here are some additional tips on what to do if you suspect that your child is the victim of a bully:

Talk to your child. A lot of times your child will not want to talk about being bullied because he or she perceives it as embarrassing and humiliating. If you notice a change in your child’s behavior and attitudes, approach him first. Offer your support and let him know that action will be taken to improve the situation. Your child will most likely be feeling isolated at school and it’s important for him to know that he can confide in you.

Document facts. Take pictures of any injuries and have your child give a detailed description of what happened. Write down the dates and times that these situations occurred and get statements from any other students, teachers or parents who may have observed the bullying. This information may be useful if police and school officials need to get involved to prove how long this has been going on and what the damage has been.

Talk to teachers and the principal. Don’t wait. Immediately contact the school and alert school officials to the problems that your child is facing. Many schools are adopting a zero-tolerance policy toward bullying. Alert other adults about this situation as well, including parents of other children and the bus driver. The more people who are aware of bullying, the more chances the act has of being stopped.

Put it in writing. In addition to talking directly to teachers and the school principal, put your concerns into writing to the principal, the superintendent and school board members. While many schools have adopted zero-tolerance policies, some school officials and teachers may not take seriously their own school’s bullying policies, or for that matter, state laws regarding bullying. Putting your concerns in writing sends a strong signal that you mean business.

Encourage others to speak up. If the same child is bullying other students, persuade parents to report it too. School officials are more likely to respond immediately if they see the problem is affecting several students.

Call the police. Many states require schools to report bullying incidents to the police, according to Findlaw. If your child has been the victim of a physical assault or repeated incidents of bullying, call the local authorities, especially if your school has not contacted local authorities.

Talk with a lawyer. If your child has been physically or sexually harassed contact an attorney. Attorneys who specialize in personal injury litigation are probably best suited to represent you and your child.

To learn about the law and what to do if your child is being bullied, visit www.Findlaw.com.