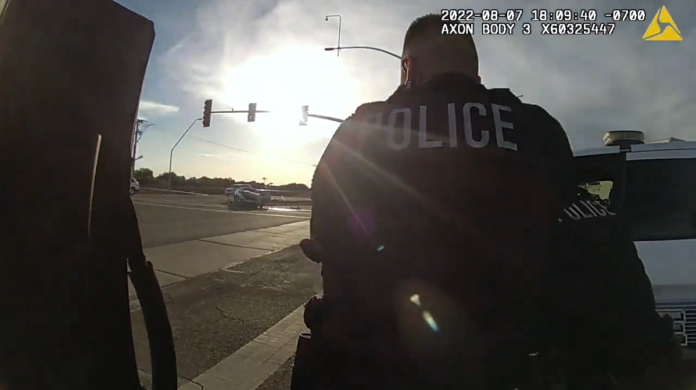 All footage shown in the videos takes place after police responded to a house in Homestead on a report of a stabbing.

At about 6 p.m. on Aug. 7, Maricopa Police received a call from a male stating he had been stabbed with a kitchen knife and had been burned with boiling water by his roommate, officers said.

Upon arrival, officers located a man who told them he had been attacked by his roommate, Michael J.  Zapata. The man at the residence was taken to a hospital for treatment of stab and burn wounds, according to a joint press release issued Aug. 8 by Maricopa police and Pinal County Sheriff’s Office.

Zapata left in his vehicle, a Toyota Scion, authorities said.

The footage begins with an officer in a Maricopa Police vehicle driving south on North Porter Road to Maricopa-Casa Grande Highway. As he opens the door, gunshots can be heard and glass can be seen flying in the vehicle.

The officer can be heard repeatedly shouting, “Shots fired!” into his radio as he takes cover behind his vehicle, the footage shows. Other officers at the scene also can be seen taking cover behind their vehicles and can be heard exchanging gunfire.

The officer then stands behind his car door and shoots about 30 bullets at the Toyota Scion. 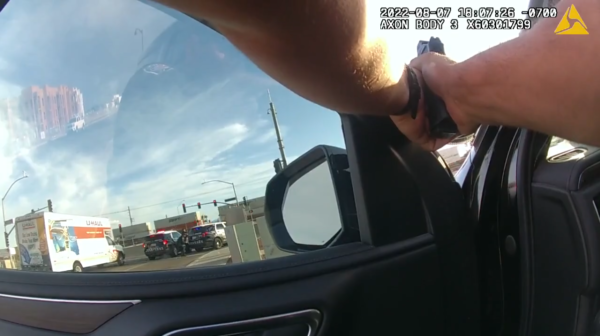 Another officer can be seen escorting an uninjured man and his son from a truck trapped in the scene at the intersection. They were not hit.

Finally, an officer says into his radio, “We got a subject down on the passenger side.”

Officers begin giving Zapata commands to show his hands, and eventually move toward him and place him in handcuffs.